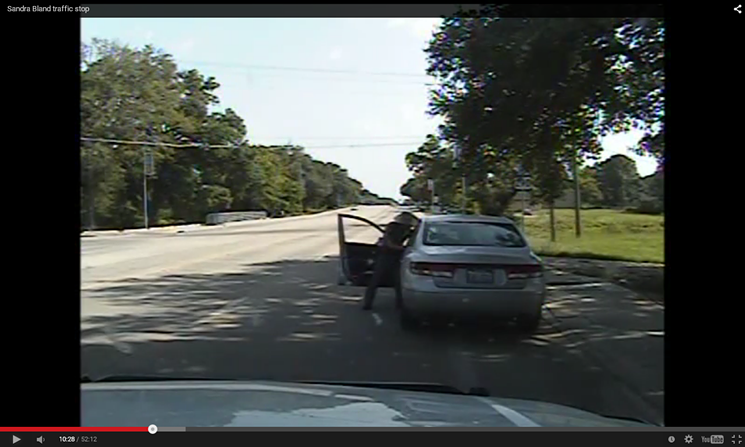 Evidently one quick way to ruffle feathers at the Texas Department of Public Safety is to start talking about race.

Earlier this month, responding to an Austin American-Statesman analysis of DPS traffic stops that showed many state troopers are much more likely to search black and Hispanic drivers over white motorists, a DPS spokesman said any suggestion that the department engages in racial profiling would be "slanderous." This week in a state hearing on the topic, DPS Director Steve McCraw's testimony basically devolved into a back-and-forth argument with a state lawmaker, with McCraw calling any accusation of racial profiling against the department "unforgivable."

McCraw testified on Tuesday before a state hearing that lawmakers called to discuss policing ahead of the 2017 legislative session. It follows another hearing lawmakers held last year after the video of Sandra Bland's arrest by a state trooper became yet another flashpoint in the roaring debate on how departments police communities of color.

If McCraw seems particularly sensitive about issues of race and policing, that might be because his department has taken some serious heat since Bland's death last year. While Bland took her own life in a Waller County jail that we've since learned was woefully unprepared to handle suicidal inmates, it was a DPS trooper who arrested Bland on the side of the road outside Prairie View A&M after a simple stop for a failure to signal while changing lanes. Video of the stop shows that when Bland asked why she should have to put out her cigarette, DPS trooper Brian Encinia ordered her out of the car, pulled the door open and lunged at her when she questioned why that was necessary, and then pointed a taser at Bland, screaming, "I will light you up!" Bland ultimately ended up facedown on the side of the road with her hands cuffed behind her back, crying.

At a state hearing called shortly after Bland's arrest and death became a national story, some lawmakers hammered McCraw (who fired the trooper, who was later charged with perjury for lying about the circumstances of Bland's arrest). State Rep. Garnet Coleman, a Houston Democrat, excoriated McCraw for his trooper's behavior. “Tell him don’t ever throw a black woman to the ground again,” Coleman sternly told the state police director. Coleman, a black man, even admitted during the hearing, "I get afraid when there’s a law enforcement officer around. I don’t see them as people who are trying to protect me.”

Since last year's state hearing on policing, more probing by Austin American-Statesman has revealed a serious disparity in how state troopers treat people of color versus white motorists. One American-Statesman analysis last December showed that in the past five years, troopers were 33 percent more likely to search Hispanic drivers than white drivers, even though they were less likely to find contraband when they searched a Hispanic driver over a white driver. Black men pulled over by DPS troopers were more than twice as likely to be searched as white men.

Then earlier this year, another investigation by the Austin daily dug even further into the data, looking at all DPS traffic stops made between 2009 and 2014 in a three-county area between San Antonio, Austin and Houston. What they found was that not all cops showed a clear racial bias. But a lot did — 35 percent of troopers, actually, who searched black and hispanic drivers at least twice as often as white drivers. The paper found 65 troopers who searched minority drivers at least three times more often than white ones. Sixteen officers searched minority drivers four times as often as white drivers.

What's more is that the American-Statesman obtained dashboard video of most of the 40 traffic stops for which drivers later filed complaints with DPS alleging racial profiling in recent years (only one case resulted in discipline; the department also concluded the trooper had not racially profiled the driver). The vast majority of those stops stemmed from the silliest of offenses – like driving in the left-hand lane without passing. In some of those videos, officers aggressively questioned drivers or asked them to search their vehicles for no apparent reason.

When Coleman questioned McCraw about how the department's own data shows a pattern of racial bias, the state police director insisted DPS' stronger presence along the border in recent years has probably skewed the numbers. "What you're saying does not pass muster," Coleman shot back, saying the department's border surge wouldn't explain the increased rates of searches for black drivers. After a while, the two basically just talked over each other.

Still, the idea that stats show a racial bias in how departments across the country police isn't even all that controversial anymore. Analysis of the New York Police Department’s controversial stop-and-frisk program showed that police targeted blacks and Latinos in nearly nine out of 10 searches. Closer to home, a recent Express-News investigation showed police here are more likely to use force on minority suspects. University of North Carolina professor Frank Baumgartner, who studies the issue, told Texas lawmakers on Tuesday that DPS troopers are 59 percent more likely to search black male drivers than white drivers after stopping them.

While McCraw might bristle at the words "racial profiling," Baumgartner assured him on Tuesday that his department isn't alone. The researcher says he's analyzed data from some 53 law enforcement agencies across the country and found racial disparity in all of them. Texas isn't the best, but it's also not the worst, he said.

Baumgartner said he wouldn't necessarily call DPS' problem "racial profiling," because that implies motive and all he can say is what the statistics show. Still, he said, the pattern of racial bias in traffic stops in Texas is "all too real" and can't be explained away.

Unless you're DPS, that is.