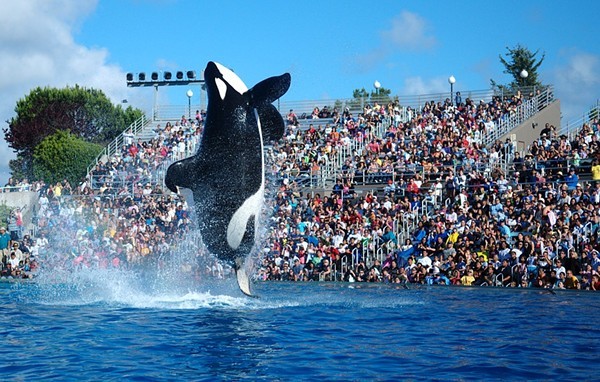 In announcing the construction of a new, massive rollercoaster at SeaWorld San Antonio, the park’s president slipped in an arguably bigger piece of news: the local theme park is bringing back its contentious orca program – the one it promised to shutter earlier this year.


“The public perception has changed somewhat,” said San Antonio park President Carl Lum. “So we are too. Our shows will be more respectful and more educational than before.”


SeaWorld dramatically rolled back its orca shows after the 2013 release of Blackfish, a documentary that unveiled an abusive, dark underbelly to the theme park's orca program. The serious financial blow ignited by the film forced SeaWorld to refocus the park’s mission, putting conservation and education above animal performances.

That is, until now. According to the company’s website describing the forthcoming “natural” orca programs, SeaWorld “will continue to present the whales at scheduled times before a guest audience.”

But, Lum said, “what we’re calling ‘shows’ is different than before. Our audiences will just be watching orcas exhibit natural behavior, like jumping.”


In March, SeaWorld announced it would stop breeding whales in captivity and begin to phase out its orca program, a move applauded by conservationists and orca advocates alike. However, the future of the remaining, “last generation” of orcas living in SeaWorld parks was unclear. Since they have all been raised in captivity, SeaWorld’s orcas wouldn’t last long if released into the wild ocean. But is keeping an arctic whale in a tank in the middle of Texas and requiring it to swim in front of thousands of people truly the most “natural” option?


It appears SeaWorld thinks so. This week’s announcement of the new orca shows is a sign the company intends to profit off the 29 remaining whales until the bitter end.


Lum stressed the new programs will be less “Hollywood” and more organic — but in explaining how, pointed to the most Hollywood-esque change in the works.


“The backdrop and set will look more natural,” Lum said. In a promotional video, SeaWorld shows a pool surrounded by a few boulders and trees. A large photo of the ocean is plastered on the screen behind the pool. The camera fails to pan to the opposite side of the pool, where the onlooking audience will sit — probably the most unnatural part of the equation. When asked why the whales will continue to be paraded in front of crowds of people for their remaining 30 to 50 years, Lum paused, then pivoted to focus on orca trainers’ expertise instead.


The new “respectful” shows are set to kick off in San Antonio by 2019.