Downtown San Antonio: Brought to You By Lincoln, Nebraska 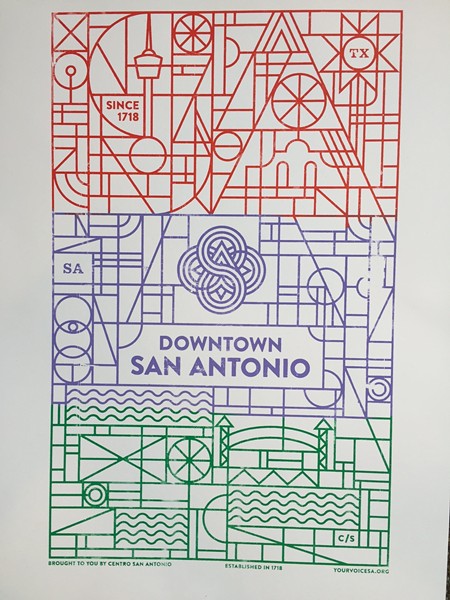 Last week, Centro San Antonio, a nonprofit cheerleader for “downtown revitalization and development” run by a former top official in the city manager’s office, threw a flashy party on Houston Street between Navarro and Presa, all to celebrate the “rebranding” of downtown San Antonio.


Part of that “rebranding” effort, which Centro CEO Pat DiGiovanni told us was part of the not-at-all vague goal of “building belief in downtown,” was a minute-long Nike ad-style promo video featuring, among other things, flyby shots of people doing yoga on the Hays Street Bridge and local graffiti artists Shek Vega and Nik Soupe turning a white wall into a stylized version of downtown’s new “logo” – a simple, serpentine-like knot-looking thing.

And how better to celebrate San Antonio talent than with live screen-printing by Cruz Ortiz, the kind of artist Absolut Vodka picks when they want designs for a new Texas-inspired spirit? Throughout the night, Ortiz printed posters one after the other sporting a sharp, clean geometric design showcasing downtown’s new “logo.”

It didn’t really look like Cruz’s work. Because it wasn’t. Because Centro tapped an ad agency from Lincoln, Nebraska to sell San Antonio to itself.

According to Eddie Romero, Centro's director of marketing and events, the organization pulled together a "marketing steering committee" led by folks with the local convention and visitors bureau, Spurs, Alamobowl, Argo Group, and Southwest School of Art, among others. Romero says Centro then put out a request for proposals from companies “with place branding expertise.” Centro eventually settled on Lincoln-based Archrival, which has, according to the company’s website, worked on ad campaigns for companies like Red Bull, Adidas, and Anheuser-Busch. Archrival, according to its website, also considers itself a leader in understanding “youth culture.” The company’s portfolio includes one other city “rebranding” effort: Lincoln, Nebraska.

Romero told us that Centro reached out to more than 20 San Antonio-based ad and marketing firms but only one submitted a proposal for the project. When we asked who the local companies were, and why the sole local submission was denied, this was Romero’s response, via email: “Archrival’s work was the best – that’s it. That’s what our city deserves.” When we asked how much Centro paid both Archrival and the local groups that helped throw the downtown "rebranding" party, Romero didn't respond.

Sure, out-of-town companies can and should be brought in to do business in San Antonio. But if Centro really can’t find a local firm capable of selling San Antonio to itself, it does beg the question of whether the local talent simply doesn’t exist or if it just isn’t being adequately tapped.

Whatever the case, if you were out at Centro's party last week, that means you got a really cool, Cruz Ortiz-printed keepsake – not one that showcases Ortiz's signature style, but rather one cooked up by a marketing committee, filtered through a Nebraska ad agency, and then touted as downtown San Antonio's new "brand."