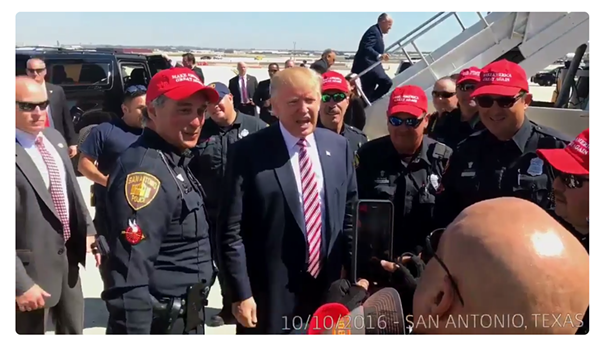 For women across the country, Donald Trump’s self-described “locker room banter” was so appalling it caused them to start publicly sharing their own stories of sexual harassment and assault.

But for a dozen or so San Antonio police officers, Trump’s recently-revealed comments about women – that, because he’s a rich and powerful man, he can “grab them by the pussy” – were benign enough for them to sport Trump's signature “Make America Great Again” baseball caps while smiling and posing for photos with the GOP presidential candidate – while on duty, in violation of city policy.

Shortly after his fundraising swing through San Antonio on Tuesday, Trump posted a 25-second video to his Twitter feed showing him with what appear to be members of the San Antonio Police Department's motorcycle unit, which escorted Trump to the San Antonio airport tarmac. In the video, some of the officers grip and grin with the candidate, snapping photos with their cell phones and giving a thumbs up as he heads to his plane. The camera then pans to the officers as they walk away from Trump, with this text flashing across the screen: “WE WILL MAKE AMERICA SAFE & GREAT AGAIN, TOGETHER!”

Hours after Trump tweeted the video, San Antonio Police Chief William McManus put out a statement saying the officers would be "disciplined appropriately" for violating city rules that bar employees from participating in political activity while on the job. "SAPD officers are charged with protecting the entire community," McManus said. "The officers displayed poor judgment. I expect them to know better than to give the appearance of endorsing a candidate while on duty and in uniform, regardless of the political campaign or the candidate.” San Antonio City Attorney Andy Segovia sent the Trump campaign a letter asking it to take down the video, calling it a "calculated political maneuver."

Mayor Ivy Taylor meanwhile tweeted that she was "disappointed" in the officers' lack of judgment. "Police must be above politics & serve everyone equally," she wrote. "Everything they do should send that message and today's actions did not."

Some worried about the message the video might send to the community those officers are tasked with protecting and policing. Johnathan-David Jones, a local Black Lives Matter activist, cited the mayor's recent efforts to address lingering distrust between local police and communities of color in the wake of the bitter passage of a police union contract last month that, despite activists' and even some politicians' urging, failed to include any police reforms. Those efforts, he argued, are only undermined when the community sees local cops, on the job and in uniform, supporting a candidate who's blamed activists for police killings and has suggested he might even direct his future attorney general to investigate the Black Lives Matter movement.

"Flaunting, smiling, shaking hands with a politician who has open disregard for communities of color – how are we supposed to feel protected by police when we see that happen?" Jones said.

Others worried about the impact open police support of a candidate caught describing how he felt empowered to sexually assault women might have on victims of sexual assault.

As the National Institute of Justice points out, research shows that the majority of sexual assault victims still do not report it to the police. Patricia Castillo, who regularly encounters survivors in her work at the local nonprofit PEACE Initiative, fears the officers' actions only exacerbate that problem. Here's how she put it on Facebook, reacting to the video:
Still, San Antonio police union president Mike Helle doesn't seem all that concerned. "Dignitaries and celebrities often visit San Antonio and treat our police officers with great kindness, respect, and courtesy," he said in a prepared statement Tuesday night. "Frankly, the officers were most likely caught up in the moment and did not consider the political nature of their actions."