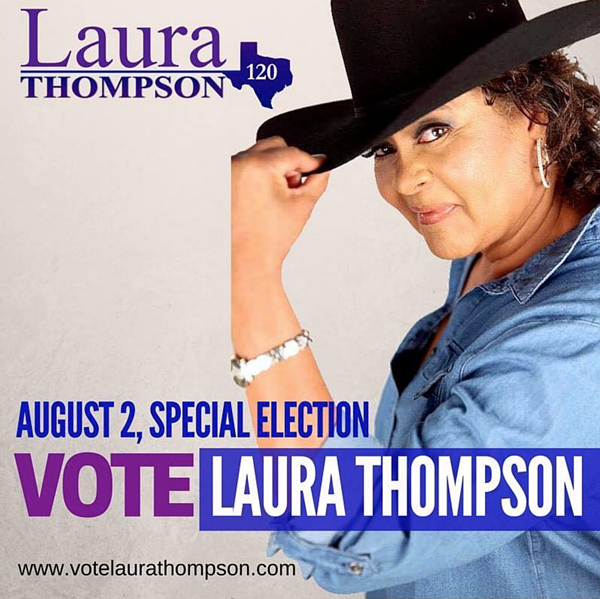 State Rep. Laura Thompson, the first Independent elected in Texas in more than half a century, turned herself in to the Bexar County jail Thursday night on a years-old misdemeanor assault charge that she didn't know existed, according to her campaign.

Lisa Jackson, Thompson's spokeswoman, told the Current that the campaign first learned about the 2012 Class A misdemeanor family assault charge before heading into a debate Thursday evening with Barbara Gervin-Hawkins, the Democrat who was thought to be heavily favored to win the seat vacated earlier this year by longtime San Antonio State Rep. Ruth Jones McClendon (Thompson won the honor filling out the remaining months of McClendon's seat during a special election in August that saw remarkably low voter turnout). Jackson says the campaign got a tip about the lingering charge and arrest warrant shortly before the debate. "We got tipped off by somebody that she'd be arrested afterward," Jackson told us.

"As soon as Rep. Thompson found out about it, she went down and turned herself in like a law abiding citizen," Jackson told the Current. Jail records show Thompson quickly posted a $3,500 bond and was released shortly after she was booked. Jackson wouldn't say much about the tip the campaign got informing them of Thompson's lingering assault charge and arrest warrant, but she told us she suspects her opponent was behind bringing the case to light – something Tyrone Darden, Gervin-Hawkins' campaign manager, vehemently denied, telling the Current, "We were not aware of it at all ... That is 100 percent not true. We don't play that kind of politics."

If Thompson's campaign seems jumpy about her Democratic opponent, that's probably because Bexar County Democrats have tried hard to kick her off the November general election ballot. While state election officials initially declared that Thompson lacked the mere 500 signatures she needed to get on the ballot as an Independent, they ultimately reversed their stance when Thompson appealed. Then the Bexar Democrats sued, arguing some 16 of her 510 signatures were bunk. A state district judge in Travis County ruled earlier this month that Thompson’s name will stay on the November 8 ballot.

Thompson's campaign says that new state rep thought the 2012 criminal case had been resolved and said the assault allegations that led to it were false. Court and police records outlining the charge weren't immediately available Friday afternoon, but Thompson's spokeswoman said it stemmed from an altercation with a family member who is still in Thompson's life. "The person that swore up this complaint in 2012, just six months ago lived with Rep. Thompson," Jackson told us. "They went on vacation together. She ate at her house. Everyone thought this had gone away."