Early Voters Are Very Eager to Get This Election Over With 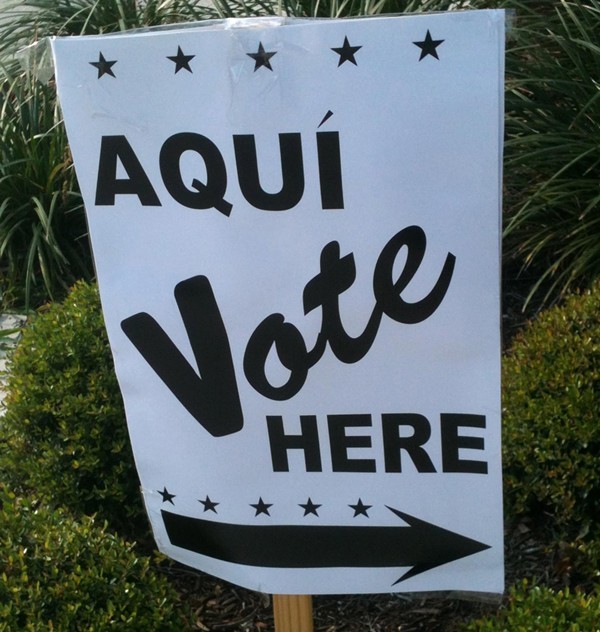 David Blackerby came out to vote Monday afternoon to “beat the crowds.” As it turns out, so did everyone else. When he got to Lions Field, one of 42 early voting stations across the county, Blackerby faced a two hour wait at the end of a long, winding line.


“I guess I underestimated,” he said, and shrugged. “But I can wait.”


For most early voters, a two-hour wait seemed to be inconsequential compared to the long wait leading up to today.


“I just need to get it over with, get through this waiting period, I’m getting more and more tense every day,” said Jose Rubal Cava, a few feet ahead of Blackerby. “The lines are just going to get longer.”


It seems many Bexar County voters shared Cava’s sense of urgency. By lunchtime, most of San Antonio's voting locations had lines out the door, some wrapped around buildings and poured into parking lots. According to one elections staffer, there were more than 400 people in line waiting to vote at Castle Hills City Hall alone.


By 3:15 Monday afternoon, just over 23,000 voters had cast their ballots, according to Bexar County Elections’ spokeswoman Donna Parker. That’s more than 3,000 every hour. At this rate, Parker said, today could bring out the largest voter turnout ever seen on the first early voting day in Bexar County. This day in 2012, the last presidential election, brought out around 30,000. And in 2008, the county saw 29,100 early voters on the first day.


On the other side of town, voters squeezed past the doors into the air-conditioned Las Palmas Library, creating a tight, snaking line through the front hall. Hendry Rodriguez stood in the parking lot, helping direct traffic and checking his phone.


“I was waiting outside to vote before they even opened the doors,” he said. “Now I’m watching the line to wait until it gets a little shorter—then I’ll tell my friends to come down and vote.”


Rodriguez, a member of the League of United Latin American Citizens, said he knows many Latino immigrants who worked hard to get their citizenship this year just to vote against Donald Trump – which isn’t surprising. Some voter registration workers have linked Bexar County’s record-breaking voter registration this year turnout to a spike in latino voters.


Rodriguez, clasping his hands in prayer and looking toward the sky, said there’s only one man to thank for this election.


“I’m looking up here but I’m thinking of Donald Trump,” he said. “Thank you Donald, the Democrats are so grateful you exist.”


Trump’s comments about immigrants, women, and especially veterans have irked Rodriguez throughout the campaign (Rodriguez himself is a veteran). He said he doesn’t understand how people can vote for Trump.


“I’m not afraid to say it: The people who vote for Trump are deplorable,” he added.


Back at Lions Field, a woman named Mary (she asked us not to use her last name) said she needed to vote as soon as possible.


“Right now I can think straight, who knows where I’ll be closer to the election,” she said.


Her daughter, Cynthia nodded in agreement.


“I’m conservative, so I’m voting for Trump,” Cynthia said, soundlessly mouthing his name. “The state’s almost split right now, so he needs our help. Also, I just want to get this over with.”


There were no signs for Trump visible outside either voting location.


Daryl Wright, in line behind the women, said he thinks the high voter turnout is due to the polarizing presidential race.


“There’s just no gray area in this election. My mind was made up a long time ago, and I’m sure everyone here feels the same,” he said, but didn’t appear thrilled about his choice. “Either way, everybody is going to walk out of here holding their noses. It’ll stink either way.”