November 02, 2016 at 9:00 AM
comment
Among the many highlights to the Spurs’ season thus far are the team’s latest H-E-B commercials, which hit the airwaves this last week. There are six new TV spots in total, adding to a canon of joyously irreverent advertising that stretches back to 2004.

On the surface, these are some of the most unassuming (and polished) local ads you’ll find – cheerful vignettes taking place in a sun-bleached slice of pre-9/11 suburbia. Their protagonists are affluent but endearingly bourgeois; they wear their basketball uniforms and hang out with an anthropomorphized coyote; they have few, if any, internal demons. In the end, it’s hard to even remember what each commercial is shilling.

But subtext abounds! After all, who can forget four years ago when Matt Bonner turned Dejuan Blair into a tub of guac? Each of these Creamy Creations is a telling glimpse into the season’s cast of characters and the delicate fabric holding them together.

Here are some quick takeaways from the new commercials:

There was a rash of rumors a few weeks ago suggesting that Aldridge wasn’t happy in San Antonio. The power forward quickly shot those down. But for any fans who were still reserving judgment, just look at him in these commercials. He’s in four of the six spots, folding origami, and they didn’t even make him speak Spanish. Then again, in ‘Coyote’s Birthday’ he does subtly re-gift the same brisket-flavored dog food that he received from the Spurs mascot last year. This one’s a push, for now.

They don’t peddle any H-E-B brand Kombucha, but the players do visit a food truck and farmers’ market, two of the supermarket chain’s biggest threats in the ongoing battle for Millennials’ hearts.

No player consistently hits his lines better than Mills. The measured frustration expressed in the ‘Origami’ spot is some of the finest acting we’ve seen from a Spurs player. That’s big for the Aussie, who’s preparing to enter contract discussions with the team next summer. I say pay the man. 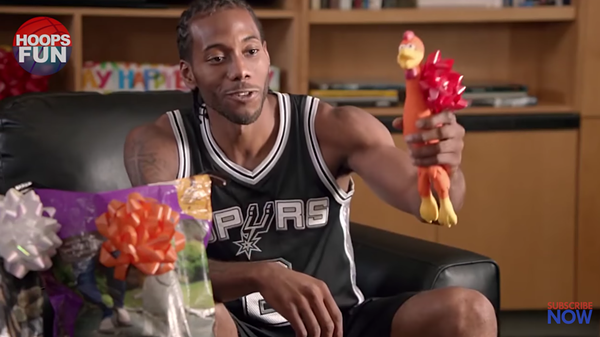 Meanwhile, the new face of the Spurs looks way more comfortable on screen now that he’s got a few years under his belt – even if the writers continue to typecast him as the team’s Michelle Tanner.

It’s no surprise that, like Oliver Hardy, Al Borland and Joe Biden, Tim Duncan was one of the comedy game’s most effective straight men. As he did on the court, Duncan was happy letting his teammates assume the spotlight, forfeiting many juicy punchlines to Tony and Manu over the years.
We remain unsure about where Duncan’s successor will slide into this picture. Is Gasol a classic straight man or more of a banana man? And can he handle some of the darker H-E-B storylines, where he’s asked to repeat the word ‘moist’ a bunch of times, or re-enact the bowling alley scene from There Will Be Blood (with H-E-B brand milkshakes)?

6. There is an H-E-B afterlife

Speaking of Timmy, he’s back, and his Gandalfian return addresses a number of questions that had been looming for years. What exists beyond the physical plane of the H-E-B Cinematic Universe? What happens when a player leaves the team? Now we know.

As in Doctor Strange, this year’s most anticipated H-E-B commercial teases us with the idea of a multiverse, showing the recent retiree step into the Grey Havens only to be greeted by fellow Spurs greats George Gervin, David Robinson, Bruce Bowen and Sean Elliott. It’s a lot like the book The Five People You Meet in Heaven, probably.