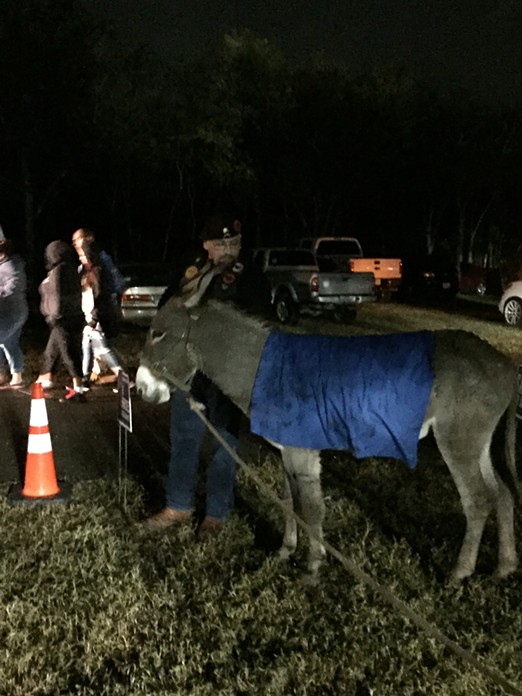 As the results trickled in Tuesday night, it appeared early on that Democrats in Bexar County had indeed made some gains in down-ballot races, securing a number of state district judgeships, two Texas House districts that had recently flipped Republican, and possibly even a close-call win against the incumbent Republican county sheriff.

Across town, people sipping beers at election watch parties seemed confident in a Hillary Clinton victory. At Brick, Victoria Benavides perfected her election-themed menu, complete with “drunken pussy ceviche” and “pink tacos.” “The ceviche has mixed fish, enough to represent all women,” said Benavides, who runs the catering business Culinary Chingona. “Fat fish, skinny fish, dark fish, white fish.” An obscene election, she said, deserved an obscene menu. At a soggy Eastside gathering of county Democrats, Claudia Sanchez touted local party wins, before pivoting to the national presidential race. “There are so many long-term consequences Trump would have on people living in Bexar County. Immigration, health care…” she trailed off, watching as a giant image of Texas turned red on the screen. “It’s going to be a long night.”

Indeed. For many local Democrats, despite those down-ballot wins, Tuesday night was overshadowed by the ascendency of President-elect Donald J. Trump, a candidate who built his campaign on promises to build a wall along the U.S.-Mexico border, to unleash a deportation force to round up undocumented immigrants, to punish women who seek abortion, and to ban Muslims from entering the country. At Edera Osteria-Enoteca off San Pedro Avenue, a bustling but small crew of local Dems watched as pundit-packed cable news panels finally started to concede that, basically, everyone was wrong. Hillary Clinton would lose. Trump would win. Many started to fold out as the 11 o’clock hour approached, grousing that they were going home to mourn in private. It started to feel like a wake.

The mood had been decidedly different just five miles away at the Bexar County GOP headquarters, as supporters, packed like sardines into a fifth-floor office suite near the San Antonio airport, stayed glued to the results coming in via Fox News. Pauline Grossman, holding a Trump/Pence placard was ebullient as she breezed through her own version of Trump camp talking points: “We’re selling out our country … Who’s going to pay for all the immigrants coming in?… China is taking over the United States … Whatever happened to ‘made in America’? … America has let go of its values.” She ended on abortion, pointing to the final presidential debate moment where Trump said these actual words: “If you go with what Hillary is saying, in the ninth month, you can take the baby and rip the baby out of the womb of the mother just prior to the birth of the baby.”

“Hillary said that’s okay,” was Grossman’s recollection. “She’s fine with that. We need change in our country.” (For what it’s worth, Clinton’s actual response during the debate: “That’s not what happens in these cases. And using that kind of scare rhetoric is terribly unfortunate.”)

Some of San Antonio’s Trump supporters gave other reasons for their decision. Matt Williams, a 29-year-old construction worker donning the campaign’s signature “Make America Great Again” ball cap, considered himself the kind of new-breed Republican that Trump’s campaign managed to pull into, and in some ways remake, the party – a Libertarian-leaning independent who, up until now, wouldn’t vote GOP. “Nowadays, the Republican Party has become one of liberty,” Williams said. Concerns that Trump’s a misogynist, racist and xenophobe are way overblown, if not entirely manufactured by the media, he says. “You can’t become a successful businessman that way…nobody called Trump a racist until he ran for president.”

Down at the Friendly Spot in Southtown, some were more explicit about why they voted Trump.

Gary Armstrong sat calmly with a friend far from the bar’s giant CNN-blaring screen. “I would never want a woman running this country,” he said, avoiding eye contact. He then added: “No, I mean...she’s a crook.”

Later, out at the Democrats’ Eastside gathering, party organizers muted the sobering results and handed the microphone over to a teenage girl. The crowd went silent as she began to sing the national anthem, at first softly and then in full bravado. Her mother stood, unprotected from the rain, recording her on an iPhone. Some came out of the covered tent to stand next to her in the mud, singing the lyrics softly, ignoring the rain as the downpour grew more intense. The song ended, and the group erupted in cheers and applause—only to be quieted again by the looming screen. Florida had gone solid red.

Someone had brought out a donkey, dressed in a blue cape, for the occasion. Soon enough, a man loaded the soaked donkey into a trailer and drove off into the night.