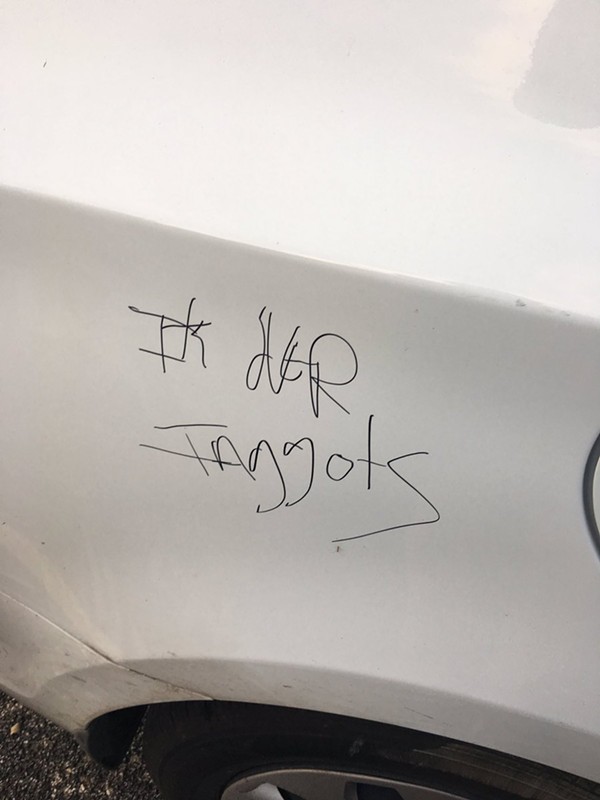 For Drew Galloway and his partner Martin, the hardest thing about finding a homophobic slur scrawled on the side of their car was explaining it to their sons.


“My oldest, who is 12, already knew what the word ‘faggot’ meant, but my 10-year-old had never heard it before,” said Galloway, director of MOVE San Antonio. “We had a lot of hard conversations this weekend.”

Galloway and Martin found the message “It’s over faggots” written on their white car in black Sharpie early Saturday morning. The car itself was barely a month old, and it had no bumper stickers or other signs indicating that its owners were gay.


“That meant they had to have watched us,” Galloway said. “They knew who we were. They knew it was our car.” Plus, Galloway added, he and his family live in a gated complex in Northeast San Antonio — meaning the person could easily be one of their neighbors. After the incident, he told his sons that they can’t be out after dark, even if it’s just to let the dog out.


“As a dad, it’s nerve wracking,” he added, checking his phone. “My oldest son walks home from school around this time, I told him to text me when he gets home.”


The San Antonio Police Department originally said the offense was filed as a misdemeanor graffiti — but after Galloway shared photos of the message on social media, officers enhanced the charges to treat the incident as hate crime.

Since last week’s election, hundreds of Americans have reported hate-fueled acts similar to what Galloway encountered. From anti-semitic graffiti to attempted assaults on Muslim women wearing hijabs, the number of racist, sexist, anti-LGBT, and generally bigoted attacks following Donald Trump’s presidential win have spiked. The minority groups facing the most harassment are the same groups Trump spoke out against on the campaign trail, making it difficult to separate the attacks from his win.


Evidently, San Antonio is not immune.


Nick Long, a member of local band Lonely Horse, said he was pulling into a Valero gas station at Broadway and Grayson on his scooter Wednesday evening when a man, who said Long had cut him off, approached him.


"He had a bunch of stuff to say – like that I'm a nigger and that I need to go back to Africa,” said Long. When the guy sped off, that's when Long saw a big Trump sticker on the back of the car.


"Look, it's not the first time I've been called a nigger. I'm a black guy with dreads who lives in Texas."


But he said this kind of attack doesn't usually happen in the open and with such little provocation. "It's like, I'm afraid just everyday interactions could lead to some racist diatribe, or worse, depending on who you've pissed off."


Anel Flores, owner of A&N Realty, had a similar interaction with a waiter at Wild Goji on Friday, the first day she and her wife had left their house since the election. They met up with friends, another female couple, to grab lunch. After serving the group water, the table’s waiter crossed his arms and, according to Flores, asked: “Would you like to hear about our presidential special?”


Sensing his agitation, Flores declined. He then erupted in an unprompted rant against Hillary Clinton.


“We are business owners and we are your customers, please just give us your service,” Flores says she asked the waiter. Instead, he said he wouldn’t serve any of them and walked away. All four women left the restaurant without ordering, flustered — and wrote about their experience on social media. To their surprise, Wild Goji staff responded immediately, offering the four a dinner on the house. They had fired the waiter.


“It was an awful experience,” Flores said. “But it’s good to know that local businesses and community members are looking out for us.”


Galloway, who reached out Flores to commiserate, said these incidents have only inspired him to be more active in supporting the wide range of minority groups under attack — especially ones with less of a community safety net.

Have you been the target of hate speech or abuse following the election? Let us know at azielinski@sacurrent.com or mbarajas@sacurrent.com.