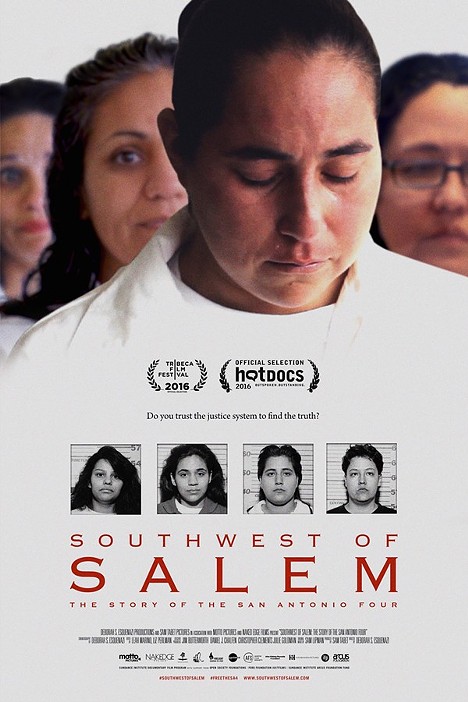 The claims were always fantastic – as in, difficult to believe.

The girls, ages 7 and 9, told police and child protection workers that a weeklong visit to their aunt's Westside San Antonio apartment in the summer of 1994 had turned into a sadistic, orgy-like nightmare. They said their aunt, Elizabeth Ramirez, had red, wild eyes as she forced them into her bedroom. The girls said Ramirez's friends – Kristie Mayhugh, Cassandra Rivera, and Anna Vasquez — held them down by their wrists and ankles, repeatedly raping them with various small objects. The girls spoke of syringes, vials of white powder, guns, and possibly a knife.

All four women turned down plea deals that would have allowed them to avoid prison time, believing their innocence would be proven in court. During two separate trials, juries heard a maze of contradictions: The assaults happened at night, or sometime in the morning, or maybe in the afternoon while Full House was on TV. Mayhugh wasn't there. Or was she? Ramirez pointed a gun at the girls as they spoke to their father on the phone, threatening them to keep quiet. Or maybe Ramirez and Vasquez each had guns. Or maybe it was only Vasquez who was armed.

It wasn't just the girls' testimony that sent them to prison, but flawed forensic analysis from a local child abuse expert who told jurors there were physical signs the girls had experienced sexual trauma.

None of it was true, according to judges with the Texas Court of Criminal Appeals, which on Wednesday issued a ruling exonerating the so-called San Antonio Four, who have fought for more than two decades to prove their innocence.

In its ruling, the state's highest criminal court blames the saga on a vindictive man named Javier Limon, the girls' father and Ramirez's one-time brother-in-law. Ramirez has testified that the allegations of abuse surfaced not long after she'd rejected Limon's sexual advances. She also says that when she was pregnant, Limon wanted to be a father figure for her child. When she turned him down, Limon was furious, according to Ramirez.

In its ruling, the CCA says that Limon "has engaged in a pattern of threatening behavior towards the complainants and false allegations of sexual assault to gain leverage in disputes over custody of his children." During a two-day evidentiary hearing last year, one of Limon's ex-wives testified that he tracked her down, pulled a gun on her and threatened to kill her after she fled with their kids to Colorado. The incident led to a custody battle, during which, to gain leverage, Limon made up assault allegations against a man the girls had been left alone with. "Javier also made false accusations that a non-existent 10-year-old boy in Colorado had sexually assaulted" one of his children, the CCA concluded. An investigation into the assault was dropped in 1992 after sexual assault examinations of the girls turned up nothing.

Stephanie, one of the girls who accused her aunt and three friends of graphic, violent assault, years later, would ultimately testify that her father was abusive growing up. She testified that when she was 14, she tried to commit suicide, got treatment, wound up in a group home and never moved back in with him. When she was 19 years old, she told a counselor that she'd never been sexually assaulted – that the allegations against her aunt and her friends were lies. She says her counselor urged her to do the right thing and come forward.

Which she ultimately did. In 2012, she recanted on camera to Deborah Esquenazi, the filmmaker behind the widely-acclaimed documentary on the San Antonio Four case. On camera, Stephanie nervously read from a prepared statement, saying, “I was threatened and I was told that if I did tell the truth that I would end up in prison, taken away, and even get my ass beat."

In court, Stephanie said that when she called her father to let him know she was going to recant, "he told me that if I did that, that he was going to hit me where it hurt." He followed through on his promise. In 2012, soon after his daughter recanted and blamed the lies on him, Limon accused his daughter of being a bad mother and tried to use the courts to take away her children (Limon's effort failed and Stephanie kept her kids). Stephanie's sister has not recanted her story.

In 2013, lawyers challenged the women's convictions under a new law that makes it easier to challenge a case based on junk science. Besides the girls' disjointed stories on the stand, prosecutors had leaned on testimony from Nancy Kellogg, a local pediatrician and supposed expert in the field of child sexual trauma who testified that a 2-3mm white “scar” on the hymen of the 9-year-old girl could have been evidence of sexual assault. In her exam notes, Kellogg also hinted at the long discredited "Satanic Panic" of the 1980s when she wrote that the abuse described by the girls “could be satanic-related." (Kellogg later recanted her trial testimony, saying the science has since shifted.)

In large part due to Esquenazi's documentary, the case of the San Antonio Four has, in the past several years, become a sort of cause celebre among criminal justice reformers (who call it the last gasp of the so-called “ritual satanic abuse” panic) and LGBTQ advocates, who see homophobia in the way the women were treated at trial. Some point to statements made by prosecutors about the women’s “homosexual relationships” as sign that the four women, all lesbians, never had a chance at beating charges they molested little girls in the much more conservative San Antonio of the mid-90s. When Esquenazi's documentary aired on national TV last month, Tonya Pacetti-Perkins threw a screening party to raise awareness of the case at Pendlebury Brew, a local coffee house she runs with her wife.

“I remember the atmosphere of that time – it was really volatile,” Pacetti-Perkins told us. “The fear of groups, of other people you don’t understand, that’s what this case makes me think of. We feel like it could’ve happened to any of us.”

Earlier this year, a state district court judge overturned the women's convictions but said they weren't "actually innocent" – an important distinction that allows them to seek compensation from the state for time wrongly spent behind bars (all have already been released from prison).

In its ruling, the CCA disagreed with the lower court, pointing to the state's "exceedingly weak case for guilt." In many ways, the ruling reinforces what virtually every journalist who's looked at it has concluded. Take, for example, former Express-News reporter Michelle Mondo's 2012 investigation of the case, which was the first to highlight the many serious problems with it.

And in case anyone still has any doubts as to their innocence, here's how the CCA capped its ruling (which you can read here):


Keith Hampton, who represented Ramirez in her post-conviction hearings, told the Current Wednesday morning that  "we're all just celebrating right now." He says the court's ruling is "basically everything we've wanted for such a long time." Ramirez, who prosecutors considered the ringleader in the bizarre ritual abuse case, had once been sentenced to 37 years in prison for the assault. Hampton says that when he spoke to her on the phone early Wednesday, she was emotional upon hearing that the state's highest criminal court had declared her unquestionably innocent.

"Liz was crying so heavily she couldn't really even talk," Hampton told us. "They were tears of joy. She's going to have a very happy Thanksgiving. All of us are."