Sinkhole Devours Two Cars and One Person On Southwest Side 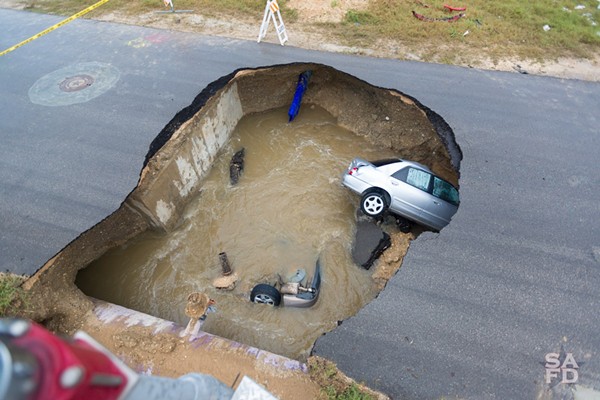 
“We are heartbroken to confirm Deputy Dora Linda (Solis) Nishihara passed away after her car fell into a sinkhole Sunday. Our thoughts and prayers are with her friends and family. Deputy Nishihara worked as a Reserve Deputy from August 2009 to October 2016 before transitioning to a part-time Deputy at the Bexar County Courthouse in October of this year. We are assisting her family as they deal with this tragedy.”


“We must identify the origins of the problem that caused yesterday’s sinkhole incident, the City, in conjunction with the San Antonio Water System will find answers that are not yet clear today. I would like to acknowledge the heroism of two bystanders who helped rescue a 60-year-old man in a vehicle that had fallen into the sinkhole. That victim was transported to a local hospital for treatment and we wish him a speedy recovery. Unfortunately, the driver of the second vehicle was not able to exit the vehicle. San Antonio Fire Chief Charles Hood confirmed this morning that crews had switched from a rescue to a recovery mission. Our thoughts and prayers are with the family of the victim during this extremely difficult time.”

City officials say a sewer line rupture may have caused the pavement on Quintana Road to collapse some 20 feet underground — pulling two cars down with it. Only one of the drivers, a 60-year-old man, managed to escape. The San Antonio Fire Department says the other person is still inside the vehicle, and is believed to be dead.

While firefighters are trying to pull the remaining body out of the sinkhole, now filled with 12 feet of muddy rain and sewage water, the surrounding pavement is still extremely unstable. SAFD battalion chief Brian O’Neil told the Express-News that if anyone fell inside the sinkhole, they’d likely be swept underground.