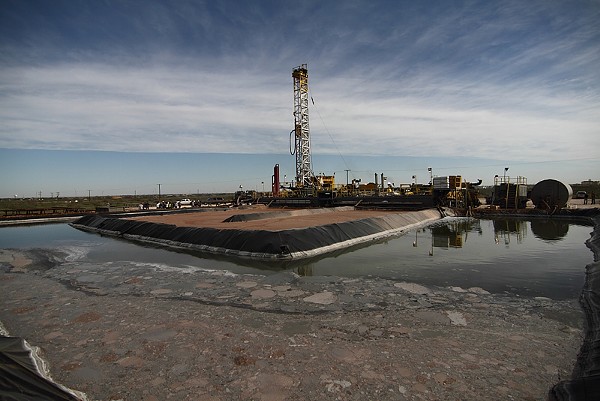 The new report, which is six years in the making, concludes that, under certain circumstances, groundwater can be fouled by mistakes made in the fracking process – which involves pumping millions of gallons of water, mixed with sand and hundreds of chemicals, thousands of feet below ground to crack the shale and release the trapped hydrocarbons.

In its report, EPA researchers identified conditions "under which impacts from hydraulic fracturing activities can be more frequent or severe" – like when industry sucks up millions of gallons to frack wells "in areas with limited or declining groundwater resources"; during spills of chemical-laden fracking fluid; when oil and gas wells aren't properly constructed, "allowing gases or liquids to move to groundwater resources"; or when industry dumps fracking wastewater into unlined pits, "resulting in contamination of groundwater resources." Due to "gaps" in the available data, the report says, it's impossible to know how widespread these problems are.

It's a more nuanced finding than what came out in the EPA's draft version of its fracking report last year, which had concluded that fracking has no widespread, systemic impacts on drinking water supplies. That finding, which was cheered by industry groups, received blistering criticism from environmental and anti-fracking activists, who pointed to cases from Pennsylvania to Texas where drilling had led to flammable, methane-tainted water.

That line – that there's "no evidence that fracking systemically contaminates water" – was deleted from the final version of EPA's fracking report. Industry groups bristled at the change, calling it a politically-motivated change of heart from the Obama Administration on its way out the door.

In a blog post Tuesday, Katie Brown, a spokeswoman with the oil industry front group Energy In Depth, insisted the overall conclusions in EPA's report remain unchanged. "This is last chapter of a long saga, through which anti-fracking activists have persisted in science denial – but the facts and the science are clear, even in this politically charged EPA report," she wrote.

But to Lauren Pagel, policy director with the anti-fracking group Earthworks, the final EPA report definitively confirms that fracking pollutes drinking water in multiple ways. "By listening to its scientists instead of its political advisors, EPA’s fracking study sets an example that we hope, but do not expect, the Trump Administration to follow," she wrote in a prepared statement.