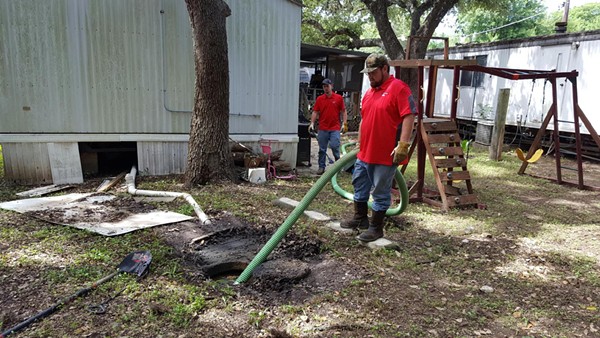 On Wednesday the City of San Antonio filed a lawsuit against the owners of a North Side trailer park where persistent, widespread sewage leaks from decrepit septic tanks forced a dozen families to evacuate earlier this year.

District 8 Councilman Ron Nirenberg and the city attorney's office announced the lawsuit against Oak Hollow Mobile Park and its owners in a press conference at city hall Wednesday, according to the Express-News, saying the city hopes to declare the property, where some 40 families still live, a public nuisance in order to force the owners to fix numerous city code violations that have made life miserable for tenants at the park.

“This is the best medium, we think, to get what we hope is immediate action from the court,” City Attorney Andrew Segovia told the daily.

This fall, the city became aware of raw sewage leaking into the mobile park’s soil after enough residents went public with their complaints. One leak had been right underneath the home of one tenant, who for months had to avoid the room in their home directly above the sewage puddle because of the overwhelming smell. In fact, twelve homes were so foul that the city’s health department was legally bound to tell those tenants, mostly families, to temporarily move out and into hotel rooms, on the city’s dime – at least until the landlord could fix the problem.

And therein lies the issue. So far, according to the city, the landlord and part owner, Joe Mangione, has refused to fix his sewage-sodden property and has been resistant to city efforts to address the many problems there. In fact, he actually tried to use the city’s emergency action as an excuse to give tenants the boot so he could easily sell the property (which just so happens to be in a prime location for redevelopment). As we reported earlier this year, Mangione actually passed out letters to tenants saying the city had ordered everyone to vacate the trailer park; the city had to send Mangione a cease and desist letter telling him to stop lying to his tenants.

While Nirenberg's office says tests on soil samples from the trailer park this week showed high levels of E. coli bacteria, previous tests showed the bacteria wasn't in the water – which would have been a much greater concern. But Nirenberg's office says it shouldn't matter whether residents are in immediate danger – rather, that people are living in appalling conditions because of persistent, raw sewage leaks that a landlord refuses to fix. “Really, this is about a mobile home millionaire that has let property go into decay to the point that government has to force compliance," Nirenberg told us back in October. “It should disturb every taxpayer in San Antonio that this guy could get away with this, and leave it to the city to come in and clean up,”

For Mangione, who was named in the lawsuit filed by the city on Wednesday (and who couldn't be reached for comment), this appears to be part of a pattern. As we've noted in the past, Mangione has been to court several times over real estate deals that went sour, and several of his San Antonio area properties have been foreclosed on for not filing taxes. Since the 80s, Mangione has held a management role in at least 13 different businesses in the area — most of them now-defunct land management companies. (One of them, ironically enough, was actually was a waste management company.)

Nirenberg's office says one of the more troubling aspects about the entire episode is why the raw sewage problem on the property appears to have gone unreported for so long. One resident told us his neighbor was actually threatened by Mangione when she told him she was going to a city meeting to discuss the sewage spills and the city's intervention on the property earlier this year. Mangione allegedly threatened to report her to U.S. Immigration and Customs Enforcement if she attended. Other tenants told us such threats were frequent and kept a lot of people from speaking up (many of the tenants are undocumented).

Here's the kicker, according to Nirenberg's office: not only has Mangione failed to fix the problems that forced twelve tenants off his property in October, but now he's actually asking them for back rent.

“We are taking every precaution to ensure the safety of our residents while also working to avoid any disruptive displacement during the Holidays,” Nirenberg said in a prepared statement on Wednesday. “We are exercising all available legal tools to hold the property owner accountable for his neglect.”