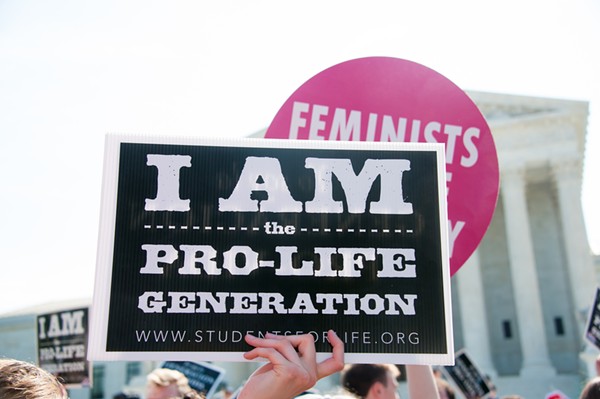 D.C. Women's March organizers have scratched a Dallas anti-abortion group from their list of event partners — calling the temporary partnership an "error."

According to the New Wave Feminists, a "pro-life feminist" group, this news was largely unexpected. They had received notice on Friday that women's march organizers were happy to add them to the partner list (to be fair, it was an automated reply every partner received). But after a weekend of outcry from fellow partners and march attendees, organizers reversed their decision.

"The Women's March's platform is pro-choice and that has been our stance from day one," organizers of the January 21 event wrote in a statement. "We look forward to marching on behalf of individuals who share the view that women deserve the right to make their own reproductive decisions."

"We are firmly against Trump's blatant misogyny, and want him to know that pro-life feminists will also hold him accountable," Herndon-De La Rosa told the Current. "The only difference from other feminists is that we extend bodily autonomy to the womb."

She plans on carrying signs that say "War is not pro-life," and "Torture is not pro-life" — along with anti-abortion messages. Herndon-De La Rosa said she wants to live in a world where woman are supported "so well" that no one should have to have an abortion. But according to her blog, that doesn't necessarily mean access to affordable birth control.

"Your causes are frivolous:...'free' abortion on demand without apology; 'free' birth control pills, and so on," writes Herndon-De La Rosa on her New Wave Feminism blog, addressing "whiny" mainstream feminists. Instead, she argues that women should embrace so-called New Wave Feminism, where women "vehemently deny that we need Planned Parenthood to give us free shit or kill our children so that we can achieve our dreams."

It's unclear how this would support women.

But instead of wanting to defund Planned Parenthood, the leading cry from most anti-abortion lawmakers, Herndon-De La Rosa would rather fund an alternative health care organization for low-income or uninsured women that doesn't support abortion.

Planned Parenthood is one of the main partners of the D.C. Women's March. And despite the fact that 97 percent of what the women's health center offers is reproductive-health services unrelated to abortion, many anti-abortion groups have already announced they'll be protesting the march because of their involvement.

While the event doesn't want to work with anti-abortion organizations, organizers say "pro-lifers" are welcome to participate.

“We’ve had some really interesting discussions with conservative folks and folks who identify as pro-life,” Bob Bland, one of the event’s co-chairs, told the Atlantic in an interview. “I can’t tell you how many emails I received from women who identify as conservative who are marching with us on January 21 because there are so many other concerns. There’s a lot more going on than one single issue."