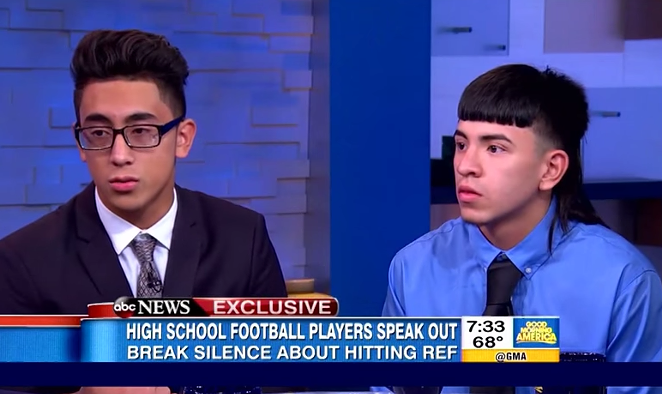 The San Antonio high school football player who intentionally tackled a referee to the ground in 2015 will return to the John Jay High School football field in the fall.

In a 5-0 vote, members of the University Interscholastic League (the state's governing organization for public school athletics) released 16-year-old Victor Rojas from his indefinite suspension Tuesday.

In September 2015, Rojas and teammate Michael Moreno tackled referee Robert Watts from behind during a football game. According to the teens, an assistant coach had specifically instructed them to attack Watts, as payback for the alleged racial comments he'd made during the game. That coach, Mack Breed, resigned shortly after the game. Watts, who called Breed's allegation "libel," has remained out of the spotlight since the incident.

“The UIL ruled in the direction of forgiveness,” JJHS football coach Gary Gutierrez told the Express-News. “I think when you’re in the kid business, you always feel good about a second chance.”

Gutierrez is still riding out the two years of probation UIL issued the former coach in 2015.