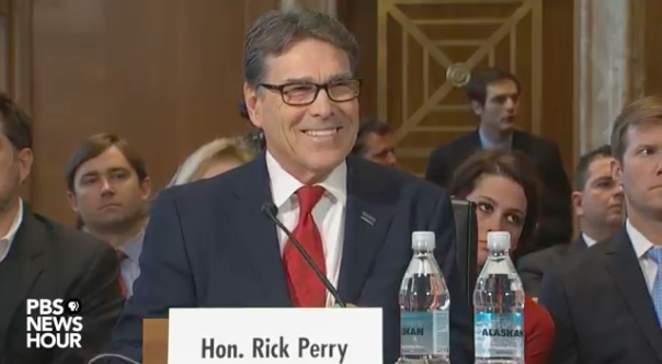 But Perry, the incoming Secretary of Energy, appeared to be the last to know.

Asked by Sen. Deborah Greer (D-Mich) how he'll run the DOE after these massive cuts she had just read about, Perry seemed perplexed.

"Just because it's on the internet doesn't mean it's true," Perry said. "I can't tell you if it's true or not."

Later, asked again by Sen. Mazie Hirono (D-HI) if he supports cuts to offices he previously told the committee were a top priority, Perry laughed nervously.

"Well, Senator, maybe they'll have the same experience I had and forget that they said that," he replied, a joking reference to that one time Perry called for eliminating the entire DOE (before forgetting the name of the department) during a 2012 presidential debate. Perry told the committee he now "regrets" that idea.

It became abundantly clear no one from the Trump transition team had told Perry about the substantial cuts on the horizon for the agency he will soon lead. Unfortunately for Perry, many of his talking points at Thursday's confirmation hearing actually focused on the importance of offices his new boss wants gone — the Office of Energy Efficiency, Office of Renewable Energy, and Office of Fossil Energy.

Multiple times, Perry mentioned Texas' significant wind power program — the largest in the country — that expanded under his governorship. "If confirmed, I will support energy in all forms, and that certainly includes our renewables," he said.

That may be difficult without the Office of Renewable Energy.

However, Trump's transition team also announced they'd defund the
Economic Development Administration, an office that specifically gives grants to "economically distressed communities" to help with job creation (and protection). Perry seemed to be reading from a different script.

Aside from his ignorance over looming budget cuts, Perry also appeared hazy on a few other major energy issues. While Thursday's hearing was the first time Perry said he believed human activity contributed to a fair amount of global warming (an idea many conservative lawmakers still scoff at) he didn't have any current data to support his new, more nuanced take.

When Sen. Al Franken (D-MN) asked Perry what percent of climate change is affected by manmade technology, Perry smirked, and said he couldn't comment since he wasn't a climate scientist.

"I don't think you're ever going to be a climate scientist," Franken replied. "But you will be the head of the Department of Energy."