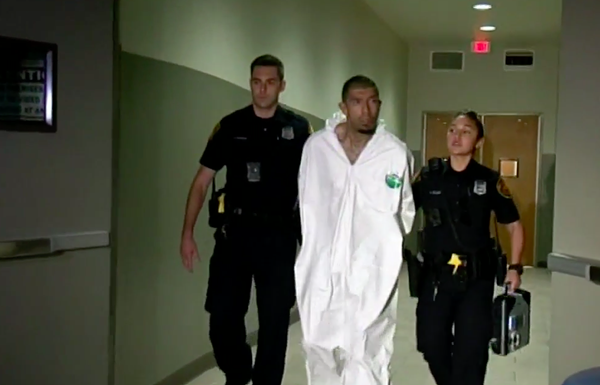 According to witness reports, two men attempted to rob a Kay's Jeweler store inside the north side mall around 3:30 pm on Sunday — but a pair of bystanders attempted to stop them from leaving the store. Police say of them, 42-year-old Jonathan Murphy, was shot and killed by suspect Jason Prieto, while the other "good Samaritan" — who police say had a concealed carry license — shot and wounded the other unnamed suspect.

Police say that Prieto then ran back inside the mall, shooting randomly, before fleeing through an exit. Converse police finally arrested him last night after receiving reports of a man driving erratically on Loop 1604. They found Prieto in a stolen car that had crashed into a concrete culvert —  and then turned him over the San Antonio Police Department.

SAPD spokeswoman Romana Lopez said both Prieto and his unnamed partner in crime (who remains in critical condition in the hospital) face one Capital Murder charge and two counts of Aggravated Assault with a Deadly Weapon.

Two mallgoers were taken to the hospital with non-life threatening gunshot wounds. Two other women, one with severe chest pains and another who began going into labor during the incident, followed.

According to a page fundraising for the family of Jonathan Murphy, the former Marine was at Kay's Jeweler Sunday with his wife, getting their wedding bands cleaned.