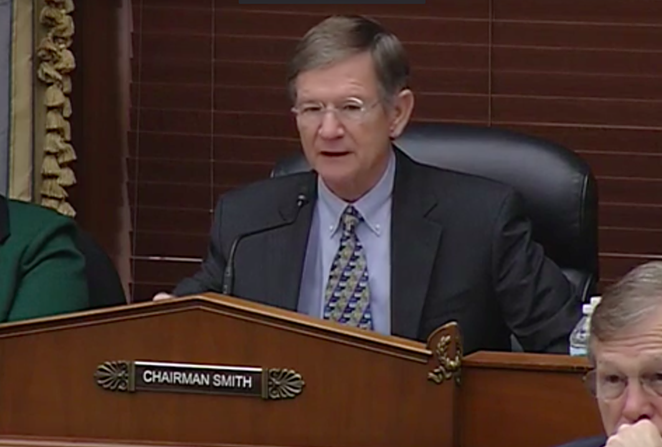 The U.S. House Committee on Science, Space, and Technology dedicated its first hearing this session on what sounds like a Donald Trump campaign slogan: "Making the EPA Great Again."

Not unlike Trump, Committee Chair Rep. Lamar Smith didn't mention the time when the Environmental Protection Agency was great. Or suggest any solutions to bettering it. Instead, Smith used the hearing to continue his years-long attack on...well, science.

"Over the last 8 years....the EPA proposed regulations that would have no significant impact on the environment," Smith, who represents sections of both San Antonio and Austin, said at the start of Tuesday's hearing. "The EPA has routinely relied on questionable science based on non-public information. Americans deserve to see the science themselves. What was the EPA hiding?"

This is a familiar line of questioning from Smith, who has spent the majority of his time as committee chairman working to ignite public skepticism of the scientific process. Most notable is his denial of man-made climate change, a doubt that's led him to falsely charge the EPA and NOAA with fabricating data and hiding reports. It also inspired Smith to file the "Secret Science Reform Act," a bill that would restrict the EPA to using only data that can be replicated (by other scientists) or made public.

But, as it turns out, there's a good reason why the act's requirements aren't already EPA guidelines. First, the EPA's studies on environmental impacts on health (a majority of its work) contain personal information that is outright illegal to publicize. Smith would be asking scientists to break the law. And by demanding replicable data, the act would swiftly delegitimize crucial data on one-time events, like the Gulf oil spill or the drawn-out effects of water contamination in Flint, Michigan.

"The success of EPA is really because the environmental protections of past decades, such as the Clean Air Act, have been based on science," said Rush Holt, CEO of the American Association for the Advancement of Science, in his testimony before the committee. "Science is not a political construct or a belief system. It's a set of principles dedicated to discovery and the use of evidence."

Holt was joined by three other witnesses who all seemed hand-picked by Rep. Smith: two lobbyists from the coal and chemical industry and an economic consultant highly critical of health-related environmental regulations.

Rep. Eddie Bernice Johnson, Dallas representative and minority leader of the committee, said she was disappointed, "but not surprised," by the biased witness selection. They will only further spread the "alt-facts" that have created a false narrative about the EPA, she added. Fellow Democratic Rep. Don Beyer, from Virginia, echoed her concern over the growing market for false information.

"It will not help anyone by disputing climate science with stories from White Nationalist websites like Brietbart.com or tabloids like the Daily Mail," he said. "Climate change is real. And environmental problems can't be wished away or pretended away because they're going to affect us, our children, and future generations."

"This is not leadership," Rep. Beyer concluded, sticking a red "Keep the EPA Great" baseball cap on his head. "This is not a recipe for greatness."