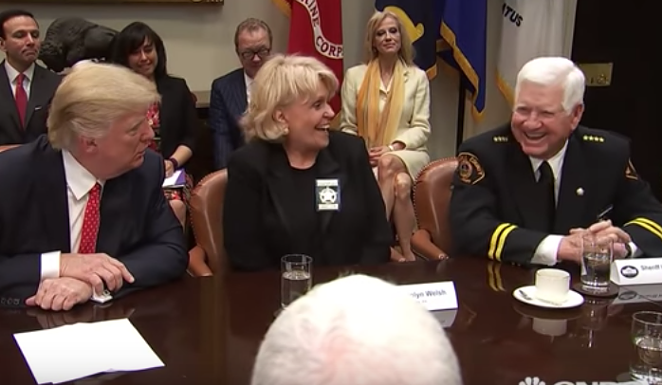 When President Donald Trump told a room full of sheriffs Tuesday he'd ruin the career of a Texas state senator for attempting to protect private property rights, the crowd erupted in laughter.

The threat, which some say was a 'joke,' was in response to Rockwall County Sheriff Harold Eavenson's complaint that a certain state lawmaker had mentioned legislation that would ban officers from confiscating a suspect's personal property before they've even been charged with a crime (a move police call "asset forfeiture"). Eavenson suggested the legislation would benefit Mexican cartels.

“Who’s the state senator?” Trump asked Eavenson. “Want to give his name? We’ll destroy his career."

Eavenson didn't — and has yet to — share the actual name, but a quick look at the Texas Legislature gives us a few obvious guesses. Both Republican Sen. Konni Burton and Democrat Sen. Juan Hinojosa have filed bills that would require a criminal conviction before law enforcement can take your stuff. Law enforcement officials have generally opposed these types of laws, since they can profit off selling assets, like a car or real estate, or simply hold on to any hard cash they seize.

“Right now, law enforcement can seize property under civil law, and it denies people their basic rights,” Burton told the Texas Observer. “There’s a basic problem with this process that I want to correct.”

Texas senators are far from the only state lawmakers fighting to reform asset forfeiture laws — the bipartisan issue has popped up in state legislatures in at least a dozen states since the start of this year. Even Texas' two wildly conservative U.S. senators, Ted Cruz and John Cornyn, have been outspoken about the need to have conviction precede any asset forfeiture.

Hall told reporters Tuesday he had "no idea" if Eavenson was talking about him in the sheriff's meeting with Trump, and believes he and Eavenson have a "very good relationship."

"I’ll be glad to talk to him," Hall said. "My honest opinion is he made a statement for a fact and didn’t make the whole statement, probably not anticipating how Trump would react to it."