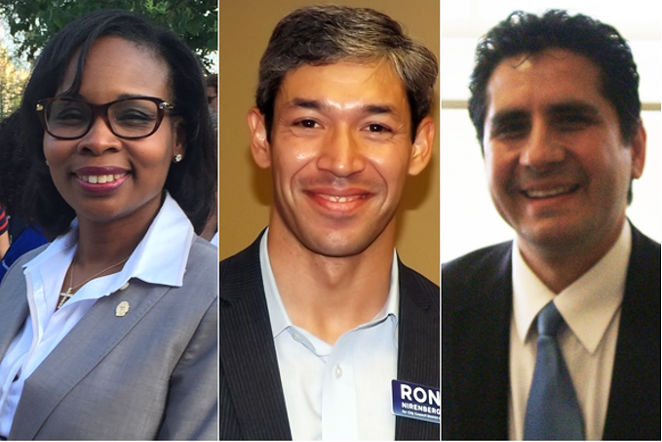 This originally appeared in our sister paper, Out in SA.

Three mayoral candidates attending a town hall sponsored by the Rivard Report on February 7* at the Pearl Stable were asked to comment on Senate Bill 6, the anti-trans bathroom bill under consideration by the Texas Legislature.

SB6 bars transgender people from using the bathroom that matches their gender identity and would prohibit local ordinances from protecting trans citizens from discrimination in public accommodations.

However, it was the discussion of SB6 near the end of the evening that drew some of the loudest applause when local architect and trans activist Ashley Smith posed the question to the candidates.

“If Senate Bill 6, also known as the bathroom bill, passes there will be no place for me in San Antonio. This discriminatory legislation will also cause San Antonio’s economy to lose an estimated $234 million,” Smith said as she began her query. “Mayor Taylor, you’ve stated your opposition to the bill. Why haven’t you spoken out against it more forcefully? And Councilman Nirenberg and Chairman Medina, what are you doing in your campaigns to stop this bad legislation?”

Taylor, who voted against the city’s nondiscrimination ordinance when she was a councilwoman in 2013, responded by saying the city was “welcoming” without ever mentioning the LGBT community in general or transgender citizens in particular.

“San Antonio certainly is a welcoming, diverse, and compassionate city, and I will do everything in my power as Mayor to maintain that reputation,” Taylor said. “We embrace every person in San Antonio regardless of their, you know, religious, ethnic, or whatever affiliation, and certainly I am not in favor of any actions or policies that would identify or discriminate against any particular member of our community.”

“In relation to SB6, I’ve stated from the start that I am opposed to that legislation,” Taylor continued. “I think it’s needless. It would be very difficult to actually implement. I don’t believe there’s going to be a budget for bathroom monitors or for those checking birth certificates. And so, I believe it’s upon us as a community to address any concerns. I’m not aware of any statistical data that shows there is a problem.”

Taylor went on to cite the economic effect SB6 could have. “[The bill] would also impact and jeopardize economic development in San Antonio. We look forward to welcoming the NCAA Final Four in 2018 and we want to maintain those jobs that will come to our community as a result of the event. We don’t want the state to pass any laws that would jeopardize that. We also believe in the concept of local control and we don’t need Austin to set new rules for us especially on issues where we have already made decisions as a community.”

Nirenberg was brief and and to the point in his denouncement of SB6.

“I think this is one area where I distinguish myself from both of the candidates . . . As the District 8 council member, I supported the nondiscrimination ordinance,” Nirenberg said to loud applause.

Medina responded to Smith’s question by disparaging Nirenberg, who he referred to as “the council member.”

“It is true, the council member voted for the NDO, but we had to twist his arm and almost had to break it off for him to do that. That’s a fact,” Medina said to the audience who responded to his comment with boos and jeers.

Medina’s characterization of Nirenberg’s NDO vote is inaccurate. In the days before the ordinance passed, Nirenberg issued a statement which said in part, “Hate has no place in San Antonio. We cannot turn our backs on the existing divisions that have revealed themselves during this debate. We need to heal our divisions as a community, and we can only achieve that by revealing them and addressing them together.”

Medina went on to say that he “already had staff’ in Austin working on this and other issues. He then called out three staffers by name and asked them to stand so the audience could see them.