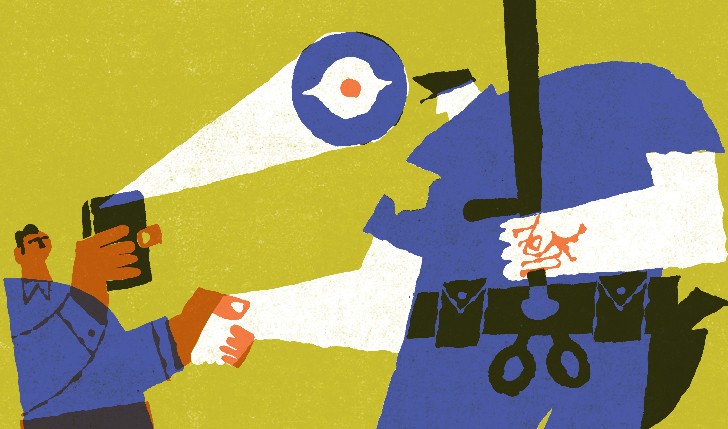 This week, there were more reports of headline-grabbing misconduct by members of the San Antonio Police Department. This time, they focused on two cops who couldn’t wait until they were off-duty to sneak away and have sex in a Home Depot parking lot.

As KSAT first reported, officers Eman Fondren and Rebecca Martinez (four- and seven-year veterans of the department, respectively) are currently appealing their “indefinite suspensions,” or terminations, as allowed under the City of San Antonio’s contract with the local police union. Their lawyer, in an interview with the station, argued that department records indicate they were never alone on duty long enough to have sex. Text messages the two exchanged while on duty, however, indicate otherwise. “I can't believe u put yourself out.. Drive to HD, drove to the parking lot.. Stripped, did me, came and got dressed again in 15 min," Fondren texted Martinez at one point. "That blows my mind!"

It’s the kind of “bad apple” situation SAPD Chief William McManus insists is rare and would likely point to as sign SAPD swiftly and seriously addresses misconduct within its ranks. Sgt. Jesse Salame, a department spokesman, told KSAT that Fondren and Martinez engaged in conduct that was “not at all ethical" and "not at all professional,” adding, "Certainly that's something that we're not going to tolerate in this department."

Depends on what you mean by “tolerate.”

While Fondren and Martinez were fired for, among other things, violating the department's rules on "good conduct and behavior," disciplinary records show other cops who kept their jobs for breaches that seem just as, if not more alarming.

City disciplinary records from the past two years show several officers who weren’t fired after being accused of behavior at least as egregious as quickies on the clock. Like the officer who had cops twice called out to his house for "disturbances" that involved allegations of domestic abuse. Or the police officers who got caught trying to cover up for fellow cops accused of serious misconduct. Or the officer who kept his job after a match.com date accused him of groping her without her consent, while on duty and inside his cruiser.

When we asked Salame about the disparity, he directed us to disciplinary procedures outlined in SAPD’s general manual, which stresses that “a high standard of conduct and discipline” is paramount in preserving community trust and confidence in police.

But the department also practices what it calls “progressive discipline,” which basically means they look at each case individually — or as Salame put it, “Every instance is looked upon in its totality.”

"Progressive discipline." It's the same general approach police take to judging whether a cop did anything wrong if he shoots and kills a suspect for wielding nothing more than a cell phone. It’s why the chief might try to fire an officer if he makes a mistake that results in the shooting death of an unarmed citizen. It’s also why the chief can change his mind, step back, and order more training instead of punishment for that officer in the very same case.

Officer Harold Thomaston meanwhile received a 25-day suspension last year for meeting his match.com date on duty, while in uniform; according to suspension records, the woman told police that Thomaston "touched her breasts and legs without her consent." The problematic "conduct and behavior" that resulted in a 15-day suspension for officer Moses Berban in 2014? According to suspension records, Berban was driving his cruiser along Wurzbach when, on the opposite side of the road, he spotted a 16-year-old "allegedly displaying an obscene gesture toward him." Berban, according to his suspension, turned his car around, jumped the median, chased the kid down and "engaged in a profane verbal exchange" before grabbing him by the head and slamming him to the ground. Oh, and Berban happened to forget to turn on his department-issued recording devices before he did it.

Perhaps SAPD seeks to fire Fondren and Martinez because two cops strip-searching each other on the job is exactly the kind of thing that can undermine the kind of trust officials say they're trying hard to build between police and policed in San Antonio right now.

But what to make of officer Gary Nel, who in 2014 kept his job after being accused of covering up for an officer he'd arrested while out on DUI patrol one night, only to let him go once he found out he was a fellow cop? Nel, a repeat offender, was handed another suspension two months later — this time for choosing Whataburger over his job. Or the 3-day suspension for Sgt. Michael Garcia, who was supposed to be investigating a fellow cop who got into a fight while off-duty. Here's how Garcia explained his job to fellow officers, according to his suspension records: “Basically, what we are trying to do is cover the officer." Garcia told fellow police officers they'd need to do "extra" work to clear the case, since the other guy in the fight "looked like he had the shit kicked out of him."

Or maybe you're one of the victims who called for help last year but instead got officer Erik Rodriguez, who was suspended but still kept his job after the department discovered he'd failed to properly respond to, investigate, or even file accurate reports for serious complaints involving child predators and domestic batterers. Perhaps you've encountered someone like officer Hector Gallardo, who was suspended for 10 days last year due to his conduct while responding to a reported assault. According to suspension records, Gallardo cracked racially insensitive jokes while on scene ("What's this girl's name? Laquanda?") and even admitted he'd filed bogus charges against one guy because, in his words, "I figured we’d fuck him over so he doesn’t talk shit or call and complain on us.”

Maybe it’s not so much the bad apples SAPD tosses that we should be paying attention to, but rather the ones it decides to throw back in the bunch.