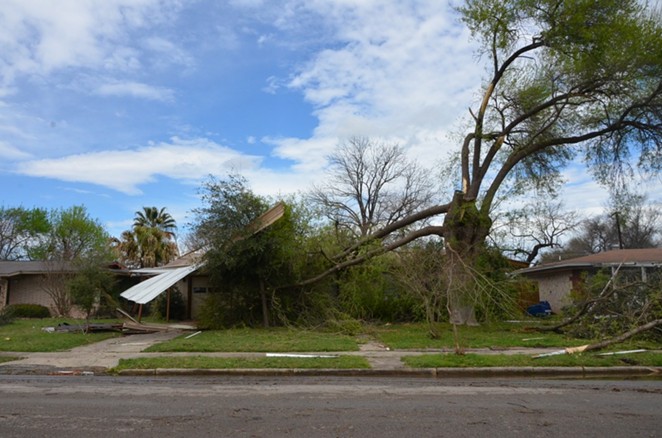 On Monday night, Mayor Ivy Taylor issued a disaster declaration for the City of San Antonio, the first step in getting state and federal help for the hundreds of residents whose homes were ravaged by a Sunday night storm that brought no less than four tornadoes to the area.

“I spent several hours today surveying the damage in different neighborhoods near the Quarry and was amazed to see roofs ripped off homes only to be found mangled in branches several doors down and 50-year old trees uprooted and toppled on tops of cars,” Taylor said in a prepared statement. “Based on what I saw, I’ve issued a declaration of disaster as a first step in potentially securing state and federal resources.”

As of Monday night, city officials said that more than 100 homes sustained serious damage from two tornadoes that hit near Alamo Quarry and northeast, near Thousand Oaks and Nacogdoches. The National Weather Service rated both of those twisters EF-1, with winds up to 105 mph. Two other tornadoes that touched down in the Glen Heights and Schoenthal Ranch areas were rated EF-0 with winds around 80 mph.

By Tuesday morning, thousands of CPS Energy customers were still without power and dozens of roads were still closed due to flooding. Check the CPS outage map and COSA website for up-to-date information on outages and road closings.