A state lawmaker from San Antonio has canceled his scheduled appearance on a South by Southwest panel because of language in the festival's contract that threatens to call immigration on artists who break the rules.

State Rep. Diego Bernal says he told SXSW organizers this weekend that he'd no longer appear on this Friday's panel, "The Business Case for LGBT Equality," to discuss the anti-trans bill winding through the Texas Legislature this week, Senate Bill 6. "I should not have to make a choice between standing against coercive immigration policies and participating in a panel on LGBTQ issues, between one person's human dignity and another's," Bernal said in a prepared statement on Monday. "I am disappointed to be forced into a choice to step away from a gathering that, at best, brings so many artists and people together."

SXSW organizers have already said that after this year, they plan on reviewing and amending the immigration-related portion of the festival's artist agreement that caused an uproar late last week. That's after they first accused Felix Walworth, the musician who first tweeted out a screenshot of the contract and urged other artists to boycott their official showcases at the festival over it, of misleadingly copying-pasting portions of the artists agreement to make it look worse than it really is — which wasn't at all true (festival officials later apologized to Walworth).

The contract states that "SXSW will notify the appropriate U.S. immigration authorities" if artists break the rules. Here's the relevant portion:

SXSW has meanwhile painted the dustup as a well-meaning "misunderstanding." In a lengthy statement last week, SXSW CEO and co-founder Ronald Swenson said the language in question has been in the contract "for many years" and was included mostly as fair warning to artists about "the likely repercussions" of violating U.S. immigration law. Swenson also defended the language in the contract "a safeguard to provide SXSW with a means to respond to an act that does something truly egregious, such as disobeying our rules about pyrotechnics on stage, starting a brawl in a club, or causing serious safety issues."

Still, the festival's statement didn't exactly address what was at the heart of the protest and calls for a boycott – that SXSW would consider breaking festival rules reason enough to "notify the appropriate U.S. immigration authorities," particularly in today's climate around immigration. Since last week, prominent artists like Killer Mike, Talib Kweli and Immortal Technique have signed on to a petition "calling on SXSW to immediately drop this clause from their contract, and cease any collusion with immigration officials that puts performers in danger."

Here's Bernal's full statement on why he canceled his SXSW appearance: 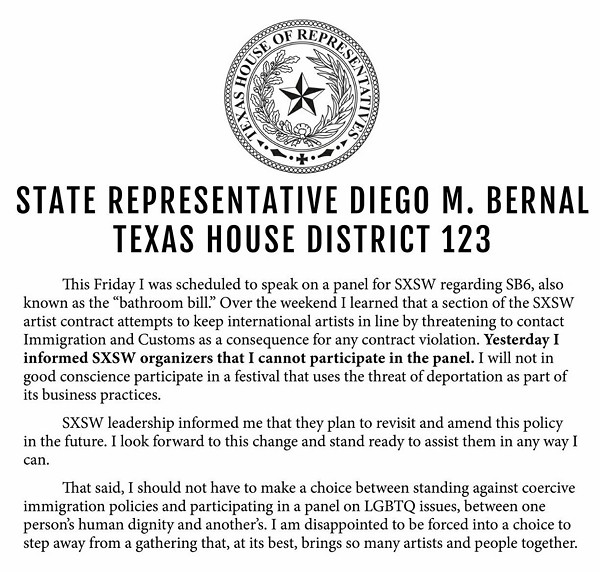