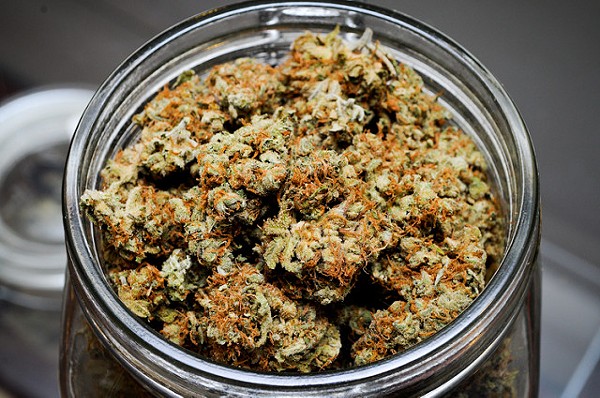 Marijuana reform in Texas is set to take center stage Monday as lawmakers in Austin discuss a bill that would eliminate the arrest, jail time, and criminal record associated with a small-time pot charge.

Advocates say House Bill 81, a bipartisan measure authored by Democrat Joe Moody and Republican Jason Isaac, actually has a decent chance of clearing the legislative hurdles it must overcome to make it to Gov. Greg Abbott's desk (where it's still hazy if it would even get a signature). That's because the bill, which would replace handcuffs and jail with a simple $250-max civil fine for anyone caught with an ounce or less of pot, is snaking its way through the legislature way earlier than similar measures did last session. In 2015, two bills that would have decriminalized pot possession gained preliminary approval from lawmakers but were never scheduled for debate before the full Texas House.

Heather Fazio, Texas political director with the Marijuana Policy Project, doesn't expect that to happen with HB 81 this time around for a couple reasons. For one, Moody, the bill's main author, boasts tough-on-crime bonafides as a former prosecutor and is vice chair of the House Criminal Jurisprudence Committee, which will hear testimony on the bill Monday. And assuming it makes it out of committee (where it's being heard a month earlier than last session), pressure's on to get it scheduled for a floor debate.

"Every minute maters when we're on such a strict time limit with the Legislature," Fazio told the Current. "That it's being heard in committee this early, that gives us a lot more time to mobilize and build pressure and to move this issue forward." She added that, if the House manages to take up pot reform this session, "it would be the first time they've seriously discussed a marijuana reform bill since the '70s."

Fazio says the public pressure part should be easy. Surveys and public opinion polls continue to show the majority of Texans favor decriminalizing pot, which has in recent years become one of those "right on crime" issues that conservatives have crossed the aisle to support.

And so have law enforcement. Consider that the state's largest jurisdiction now won't even bother prosecuting such small-time cases. As of this month, law enforcement officials in Harris County will no longer arrest and prosecute people caught with less than 4 ounces of marijuana, a crime currently punishable under state law by up to a year in jail and a $4,000 fine. Under their new plan, all misdemeanor pot defendants have to do is pay $150 fine, take a "decision-making" class and they avoid jail time and a criminal record. With some 4.5 million people in the region, it's almost like another state just decriminalized pot. And defense attorneys here have pointed out how Bexar County could save more than $9 million a year with a similar approach.

"It has taken the legislature a very long time to catch up with the public opinion of Texans on this," Fazio says. "What your seeing is some local jurisdictions realizing that and reforming what they can now, on their own."

Fazio says MPP is organizing people to testify before lawmakers on Monday about the human toll of the state's current, harsh marijuana laws. Even as lawmakers in more than half of these United States have legalized cannabis in some form, in Texas a pot charge can still derail your life — significant jail time and a criminal charge that can threaten your job or even student financial aid. And the patchwork approach currently taking shape can lead to some very unequal consequences for the very same offense. Consider that in recent years, some Texas cops have even decided to stick their hands inside of people on the side of the road because they thought they smelled something skunky.

The thing is, HB 81 is actually one of the milder marijuana reforms proposed this session. It alone doesn't address the number of other cannabis-related issues advocates desperately want the legislature to tackle — like a "medical marijuana" law that's practically useless, or the fact that, because of the brain-twisting way Texas charges people caught with edibles, getting caught with too many pot brownies could carry a potential life sentence.

Marijuana laws here are still quite harsh, comparatively speaking. But if advocates are right and they manage to push HB 81 through this session, that would be a big sign that the Lone Star State's finally starting to mellow on the issue.