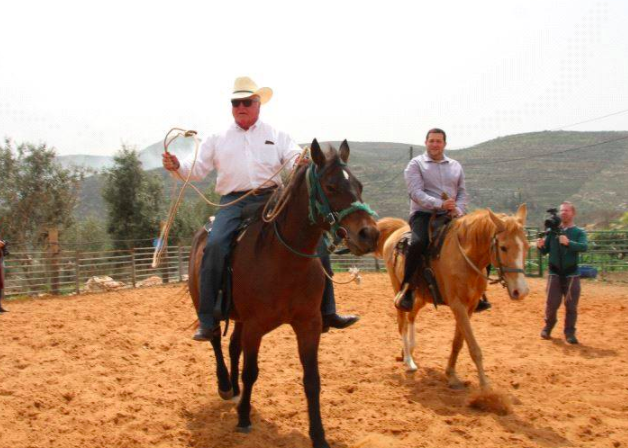 On Thursday, Israeli officials visited Washington, D.C. to discuss the future of Israeli settlements in Palestine. While they came to no solid conclusion, the White House released a statement hinting the countries were "moving toward a peace agreement."

According to the Jerusalem Post, Miller visited local leaders and activists on the north end of the West Bank this week to tour farmland on horseback and sign a vague trade agreement between Texas and a region of Israel. "I’m here...to create a revived Texas-Israel exchange," said Miller, wearing a cowboy hat and sunglasses, in a video interview.

Asked whether he supports unregulated resettlement of Palestine territory, Miller didn't miss a beat: “I think the Jewish community, the Jewish State needs to reclaim all of its land, I don’t have a problem with that at all. The sooner the better."

This seems to go against the Trump Administration's mission to reach a peaceful settlement agreement between the two countries.

"My personal opinion is that [Jewish people] should be able to settle anywhere in the holy land if they want to," Miller added.

Miller's trade deal, promising an exchange of agricultural technology and expertise between the two governments, seemed to serve more as a symbol of unity than an actual necessary trade agreement.

“I am ashamed to say that we have some in our universities boycotting Israel, so this is to counter that culture,” Miller told reporters, referring to the economic sanctions a handful of U.S. colleges have placed on Israel to protest the country's occupation of Palestinian territory.

"This is a significant move that sends an unequivocal message to the parties promoting the boycott ... Israel that the countries of the world will not accept this boycott," said Yossi Dagan, the leader of a network of Israeli settlements on the West Bank.

In the Post's video, Miller pulls Dagan into view of the camera and slaps him cheerfully on the back. "[We've been] riding horses, checking eggs and sheep and wine," Miller said.

Or, as Dagan put it: “As foretold by the Prophet Jeremiah, ‘you shall yet plant vines on the mountains of Samaria; the planters shall plant and shall eat them as common things’."