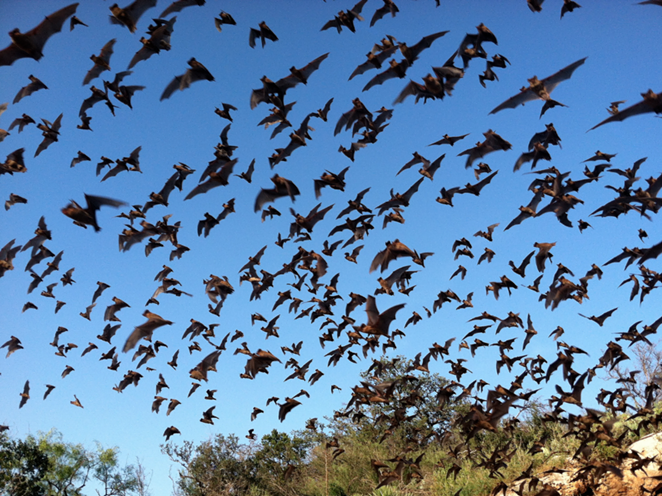 For the very first time, a fungus that causes white-nose syndrome, a disease that's decimated bat communities in other parts of the United States, has been detected in Texas.

According to the Dallas Observer, pseudogymnoascus destructans, the disease-causing fungus, has been found among the tri-colored bat, the cave myotis and the Townsend's big-eared bat across caves in 13 counties in North Texas. Fortunately, no signs of the disease itself have so far been detected.

Research associate and doctoral student with Texas A&M University’s Department of Wildlife and Fisheries Sciences Melissa Meierhofer told the Observer that so far the bats that were tested appear healthy. However, the fungus still has Texans worried.

First discovered in a New York cave in 2006, the fungus has now spread to 33 states since then and has killed an estimated 6-7 million bats, causing certain bat populations, like the northern long-eared bat and the small brown bat, to decline by more than 95 percent in some parts of the country.

For Texas farmers who rely on bats to help with pest control, the fungus found by the Bat Conservation International, Texas A&M University’s Department of Wildlife and Fisheries Sciences and the Institute of Renewable Natural Resources, might seem like cause for concern. However, the fungus has been found to thrive in cold, humid caves where bat species typically hibernate, which means that with Texas' shorter winters, Texas bats could be less susceptible to the disease.

As the Observer points out, the Mexican free-tailed bat doesn't hibernate at all (you can thank our warm winters for that), therefore, even if the fungus spreads to the free-tail, there's a chance they won't even get sick. So far, no free-tail bats have been documented with fungus on them.

Texas Parks and Wildlife Department says it will continue to work with landowners and partners like BCI to protect bats in Texas and that public bat-viewing spots like Devil's Sinkhole Natural Area and the Old Tunnel Wildlife Management Area will remain open for now. However, the department intends to prohibit folks from select caves where wild bats are known to live in order to prevent fungal spores from spreading.