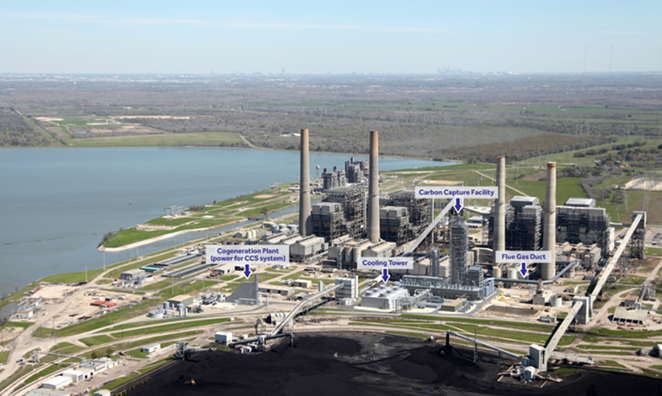 Last Thursday, U.S. Energy Secretary Rick Perry and Texas Gov. Greg Abbott attended the valve-opening ceremony of Petra Nova, a brand-new carbon capture facility outside Houston. Both politicians are established climate change skeptics and appeared excited for the $1 billion project, although not necessarily because it's a win for the environment. While touted as proof that coal can be "clean," the Petra Nova project will translate into more fossil fuel production.

“Everything is bigger in Texas so it is fitting that the largest post-combustion, carbon-capture facility in the world is right here in the Lone Star State,” said Abbott in a press release.

Perry, who previously called human-caused climate change a “contrived, phony mess,” said on Thursday that “the greenhouse gases that scientists complain is a byproduct of energy production is now being corralled by innovation in Texas.”

What Perry didn't mention is what happens after that 1.6 million tons of carbon is “corralled” underground. Once CO2 is separated from other byproducts, it will be transported via an 81-mile pipeline to the West Ranch oil field in Jackson County. There, the pure CO2 is used to produce more oil, by a process called enhanced oil recovery. The Petra Nova project will help produce an estimated 60 million barrels of oil, or three times the oil field's previous capacity.

So while this sequestration project does initially take CO2 out of the atmosphere, it will ultimately be contributing to newly extracted fossil fuels. What Perry called "reviled CO2" last week now translates into big money for Texas oil and gas.

Environment Texas Director Luke Metzger said that the technology used at the Petra Nova carbon capture project is unproven. "The fact that they are using carbon to dig up more oil means there's a net carbon increase, not decrease," he told the Current. "As a pollution reduction measure it doesn't help us at all."