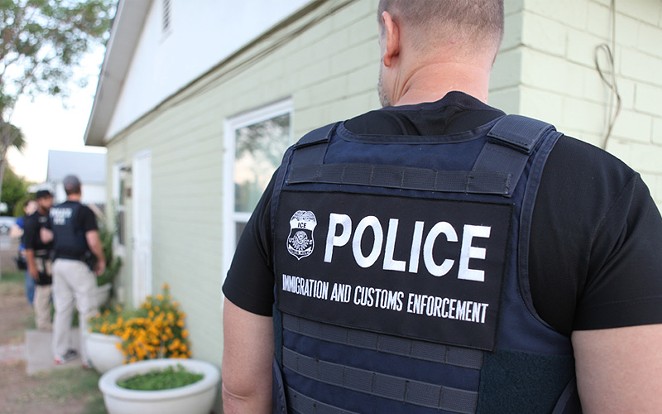 On Tuesday, a judge temporarily blocked President Donald Trump from following through on his threat to strip federal funding from so-called "sanctuary cities," where police departments seek to limit their role in federal immigration enforcement.

The ruling by federal district judge William H. Orrick comes after a lawsuit filed earlier this year by the City of San Francisco and Santa Clara County, the first jurisdictions to take the Trump administration to court for threatening to cut off billions of dollars in federal funding because of supposed sanctuary city policies. In his ruling, Orrick wrote that Trump overstepped his authority with a January executive order that tied federal funding to local officials' cooperation with U.S. Immigration and Customs Enforcement. Orrick wrote that only Congress gets to put such conditions on government spending.

As we've reported before, the term "sanctuary city" is a nebulous one with no real legal definition — something flexible that tends to bend to the whim of whichever politician is currently stoking fear over undocumented immigrants. Texas conservatives, for instance, consider places like Travis County a sanctuary city that should be punished into compliance, even if the feds apparently do not. Gov. Greg Abbott has called the anti-sanctuary cities bill currently winding through the Texas Legislature one of his "priority" issues this session.

Travis County's new sheriff earlier this year announced that her office would no longer honor every single "detainer" that comes from ICE, routine requests from the feds for local jails or police departments to hold people in custody, even if their local charges have been dismissed or otherwise resolved. Immigration attorneys have long argued those "detainer" requests are often flawed and fall below the legal standard of a warrant or judge's order to keep someone in lockup. One federal court has even ruled that ICE's current way of doing things is unconstitutional.

Senate Bill 4, which heads to the Texas House floor for debate on Wednesday, goes beyond just attacking Travis County's new stance on ICE detainers — which is basically that federal immigration officers should have to get a warrant to detain immigrants on what are most often civil, not criminal, violations of immigration law. As we've previously reported, Texas' ban could impact even cities that don't put themselves in the "sanctuary" category, cities like San Antonio, where police have a policy of discouraging officers from inquiring about immigration status. Not only does the bill threaten to withhold funding from cities and counties that limit their cops' participation in immigration enforcement, SB4 would also subject sheriff, constable or police officials to a Class A misdemeanor for failing to do what ICE wants when it comes to detainers.

Which is why of the state's top law enforcement officials, like San Antonio Police Chief William McManus, have been among the loudest public opponents of SB4, which they insist will strip their departments of local control and further engender fear in local immigrant communities — which in turn makes people less likely to report crime and ultimately harms public safety, they argue. Consider that Houston's police chief has already said that the number of Hispanics reporting rape in that city is down 43 percent from last year and that reporting of other violent crimes saw a 13 percent dip, stats he's attributed to fear immigrants have over pending crackdowns at the state and federal levels. A Dallas-area Democrat in the Texas House is so appalled by the bill she's launched a four-day hunger strike in protest against it.

The House is set to go into session at 10 o'clock Wednesday morning. You can find a live video feed of the floor debate here. Lawmakers are telling the Texas Tribune they expect it to be a "total shitshow."