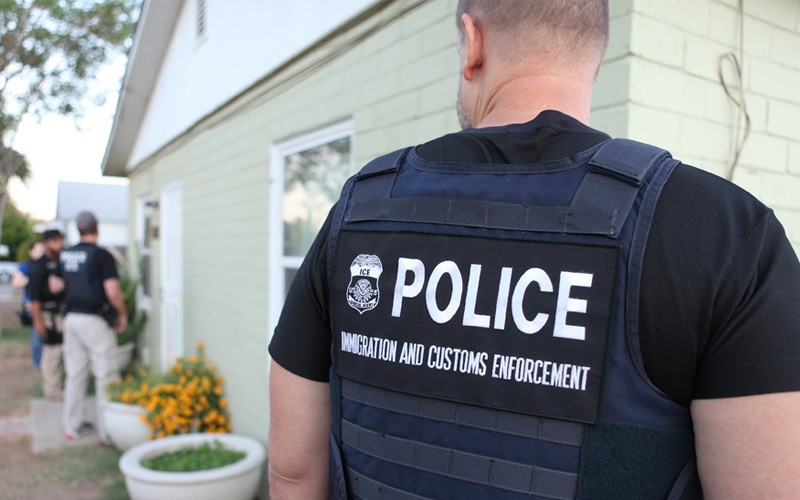 *Update 3:30 pm: The Texas House gave Senate Bill 4 final approval Thursday afternoon. As the Austin American-Statesman reports, Democrats on Thursday hadn't give up efforts to change the bill even as it sailed towards passage, including filing a failed, last-minute amendment to delay SB 4's implementation until the U.S. Supreme Court can decide whether it violates the Constitution.

The bill now needs final Senate approval before heading to the desk of Gov. Greg Abbott, who has made a "sanctuary cities" crackdown one of his legislative priorities for the session.

Senate Bill 4, which opponents have called Texas' version of Arizona's notorious "papers please" law, would effectively ban police departments in cities like San Antonio from enforcing internal policies that tell cops not to ask about immigration status in routine law enforcement encounters. It would force police departments and sheriff's offices to comply with routine requests from U.S. Immigration and Customs Enforcement officials to detain immigrants suspected of being in the country illegally — requests that immigration attorneys and even one federal court judge say are flawed, fall below the legal standard of a warrant, and are therefore unconstitutional. Police officials who don't cooperate risk a Class A misdemeanor charge and steep fines under the bill. It applies even to college and university campus police departments.

House Republicans approved the bill on a party-line 94-53 vote after shooting down virtually all the amendments Democrats filed to make the bill more palatable or at to least shield vulnerable communities — like exceptions for police at domestic violence shelters, homeless shelters, pre-kindergarten schools, even high school football games.

Instead, hardline conservatives in the House made the bill even more potent than the initial version up for debate. Matt Schaefer — a Tyler Republican who last session tried to make women carry nonviable fetuses with “severe and irreversible” abnormalities to term because, as he put it, pain and hardship are "part of the human condition, since sin entered the world" — attached an amendment expanding papers-please powers to any cop who legally detains someone (the initial version that went to the House floor limited that only to people who were arrested for a crime).

Schaefer even rubbed salt in the wound, later chiding Democrats for failing to stop his amendment, saying he would have pulled it if they'd have simply agreed to cut the hours-long debate short. He called their drawn out floor speeches a "filibuster."

Here's what they said during the "filibuster."

Rep. Ana Hernandez, a Houston Democrat who came to the United States as a child and undocumented immigrant, told colleagues she knows firsthand the impact the bill will have on many families. She worried about "mothers that will be afraid to go to the grocery store."

"I know how this bill will punish immigrants and push them into the shadows,” Hernandez told fellow members.

Dallas-area Democrat Rafael Anchia, chair of the Mexican-American Legislative Caucus, called it "a dark day in the House," saying, “This feels incredibly disrespectful for a lot of people in our state." He said the premise of the bill is "built upon a series of lies.”

Rep. Mary González, a Democrat from Clint, told other House members she's a survivor of sexual assault and feared immigrants would be afraid to report such violent attacks if the law passes. It's not an abstract concern. Houston's police chief has said that already the number of Hispanics reporting rape in that city is down 43 percent from last year, and that reporting of other violent crimes saw a 13 percent dip during that same time. The chief has attributed the decreased numbers to fear immigrants have over pending crackdowns at the state and federal levels.

On Wednesday night, the chief tweeted this:

Violent crime is on rise across our Nation & some would rather men & women in blue go after cooks & nannies, instead of hardened criminals.

On the House floor, González told colleagues she would take this particular vote personally. “If you ever had any friendship with me, this is the vote that measures that friendship."

According to the Texas Tribune, House members finally cut debate short and tossed some 170 amendments waiting in the wings, granting the bill tentative approval around 3 a.m. Thursday. The vote comes just days after a judge blocked the Trump Administration's own efforts to punish so-called "sanctuary cities" by revoking federal funds. The vote also follows recent reports that, even if Gov. Greg Abbott and conservative state lawmakers consider places like Austin "sanctuary cities," the feds evidently do not.