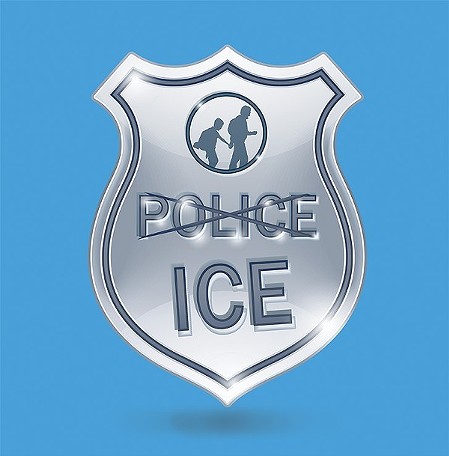 And in case anyone had any doubt about how giddy Abbott is to sign Senate Bill 4, a measure to crack down on so-called "sanctuary cities" that critics say mirrors Arizona's infamous "show-me-your-papers" law and will lead to racial profiling, check out this tweet from the guv last night:

Lawmakers sent the bill to Abbott's desk despite loud opposition from the state's big-city police chiefs, who fear it could erode trust in law enforcement in immigrant communities and make it harder to solve crimes if witnesses fear that talking to the cops could lead to immigration enforcement. Under the bill, police departments can't stop their officers from asking about immigration status during even routine police encounters, like a traffic stop.

"We are very, very fearful that the community will no longer cooperate with us because of this bill," San Antonio Police Chief William McManus told reporters last week. He also warned the law will lead to racial profiling and said there's "not one thing in this bill that I consider to be positive, nor do my colleagues consider to be positive."

The bill that awaits Abbott's signature will effectively ban departments in cities like San Antonio from enforcing internal policies that tell cops not to ask about immigration status in most police encounters. It would also force police departments and sheriff's offices to comply with requests from U.S. Immigration and Customs Enforcement officials to detain immigrants suspected of being in the country illegally — requests that immigration attorneys and even one federal court judge say are flawed, fall below the legal standard of a warrant, and are probably unconstitutional. Police officials who don't cooperate risk a Class A misdemeanor charge and steep fines under the bill. The law even applies to college and university campus police departments.

Abbott's warmed-up signing pen aside, the debate over SB 4 (which has been long and ugly) probably isn't over even after he signs it into law. Some of the lawmakers who opposed it have already floated the idea of suing to stop the bill from taking effect.