Congressman Will Hurd One of Few Republican Lawmakers to Oppose AHCA 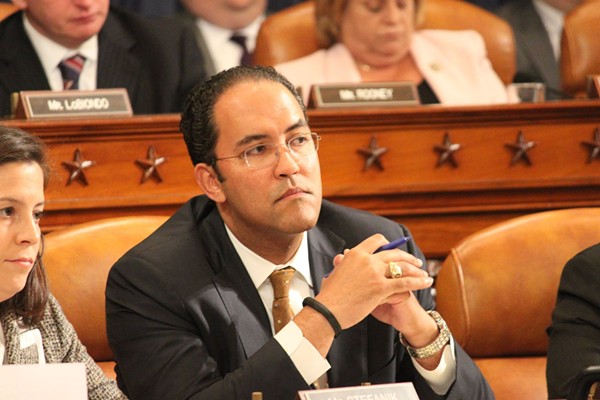 For conservative lawmakers, the Thursday passage of the American Health Care Act in the U.S. House came as a resounding victory — a sign that their years-long fight to repeal Obamacare may soon come to an end. But not all GOP representatives were pumping "Eye of the Tiger" or scooting gleefully out of session after the bill's passage.

Twenty of the House's 237 Republican members of Congress voted against the AHCA — a bill that, among other things, rolls back protection for Americans with pre-existing conditions (which somehow include being raped, now). San Antonio Congressman Will Hurd was one of them.

"The AHCA in its current form does not address the concerns of many of my constituents, including adequate protections for those with pre-existing conditions and the challenges faced by rural healthcare providers," he wrote in a Thursday statement. "I am unable to turn my back on these vulnerable populations because I believe we can and must do better for the American people."

Nearly 18 percent of Hurd's vast West Texas District 23 (which stretches all the way from El Paso to San Antonio) live at or below the poverty line, according to U.S. Census data. For single mothers with toddlers, that number bumps to 51 percent. Compare that to fellow Republican Lamar Smith's District 21, which includes slivers of San Antonio, Austin, and the Hill Country, and has only 4 percent of its population living in poverty (Smith voted for AHCA).

This means a hefty number of Hurd's constituents are eligible for Medicaid — a program that the AHCA promises to limit.

Of course, Hurd's opposition doesn't mean he's embraced Obamacare. He's just extended his disapproval of the healthcare plan to the AHCA.
"While the goal of Obamacare was to make healthcare more accessible and more affordable, it has done just the opposite," he said Thursday. "Likewise, while the goal of the American Health Care Act was to combat the skyrocketing premiums and outrageous deductibles millions of Americans face, it too, falls short."

However, the former CIA agent's take on internet freedom laws are some of the most conservative in the country (it helps that he has major tech companies financing his campaigns) and has voted to pass several bills that would make it harder for scientists to research climate change.

Some Texas Democrats made sure Hurd didn't leave Thursday's vote as a hero.

“He would have been better served had he been more upfront and vocal about why [AHCA] was bad for Republicans from the get-go,” said Rep. Marc Veasey, a Fort Worth Democrat, in an interview with the Dallas Morning News.

Hurd may have saved himself from being voted out of office in 2018 — a threat many are hanging over his pro-AHCA colleagues — but he certainly hasn't stopped his party from endangering the "vulnerable" West Texans he says he cares about so much.