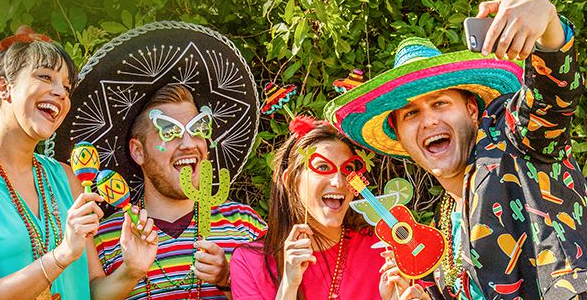 Marking the 155th anniversary of Mexico's victory over the French Army at the Battle of Puebla, today is Cinco de Mayo — a day that has become synonymous with cheap margaritas, taco specials and classless party favors.

Outside of Puebla, Mexico, the holiday isn't typically celebrated elsewhere, so it's often baffling to Mexican and Mexican-American communities living in the United States when Cinco de Mayo parties start popping up, advertising a night full of drinking and celebration. Like, a "Cinco de Drinko" party hosted last weekend by Baylor University fraternity Kappa Sigma, where students reportedly dressed as maids, construction workers, wore sombreros and ponchos, with some students even going as far painting their faces brown.

Since the event, Baylor University has launched an investigation, calling the party a "racially insensitive event," and has suspended the Kappa Sigma chapter. On Monday, Baylor students rallied by the school's Fountain Mall, asking for a formal apology, mandatory cultural competency education and more diversity, reports CNN.

While Baylor continues to investigate the "Mexican-themed" party, let's hope the entire situation act as a reminder of how to not act on Cinco de Mayo.