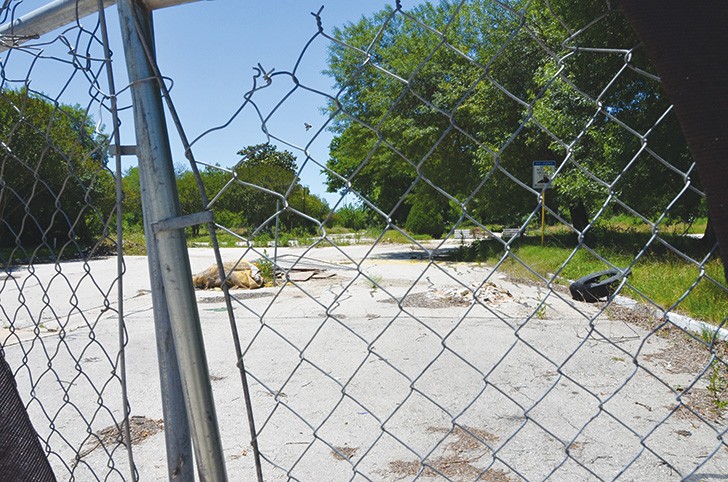 Sometime in early February 2014, residents at Mission Trails spotted two yellow rezoning signs posted near the entrance of their community.

They would eventually learn of plans by local real estate developer, White-Conlee Builders, to rezone the 21-acre mobile home park to make way for a 600 unit luxury apartment complex. Rents for a one-bedroom would be about $1,000 per month, in line with the new average rent in the rapidly changing neighborhood south of downtown. Developers would later boast of plans for a “Mission theme” at the complex. It would, after all, be situated along the Mission Reach of the San Antonio River, the site of a multi-million dollar taxpayer-funded revitalization project that refashioned the river into one of the city’s most cherished public spaces – and made the land around it attractive to developers almost overnight. They called the project Mission Escondida, the “Hidden Mission.”

To real-estate developers and their boosters, it was progress, the continued revitalization of San Antonio’s urban core and the fruit of what former San Antonio Mayor Julian Castro had dubbed the “Decade of Downtown.”

To the residents, however, progress was the boot that kicked them out of their homes. Some wept the following month as city council, in a split vote, approved the zoning changes that ushered them out of the park. Castro, who voted against rezoning the property, created a task force on gentrification to learn from the episode as the city continues to throw money, through incentives and tax abatements, at developers who want to make his vision for downtown a reality. The city would even create an entire new commission (the “Housing Commission to Protect and Preserve Dynamic and Diverse Neighborhoods”) tasked with finding ways to safeguard vulnerable people at risk of being shoved out in the city's new wave of urban redevelopment.

The commission’s most significant step so far? Those zoning signs, the only warning Mission Trails residents got that they’d have to leave their homes, now must be larger and include information in Spanish.

Meanwhile, research continues to highlight the damage done when development displaces an entire trailer park full of people. This week, activists and researchers who have been following the stories of about half of the 106 families forced to leave Mission Trails in 2014 dropped a new, troubling report that details how disruptive the displacement was for many of the families who lived there – from dismantled social networks to extreme poverty, homelessness and health problems that were exacerbated by the move. Some went into debt or burned through their savings because of it. Many, according to the report, said the financial assistance offered by the developer (on average, about $4,500 per household, according to the report) didn’t come close to covering the costs associated with the abrupt move. These weren't transient people, the majority of them owned their homes and, on average, lived at the park for about 10 years. A few residents had lived there for more than three decades.

Three residents died in the months after the move, two elderly women and a middle-aged man who took his own life.

Marisol Cortez, the report’s lead author and researcher, says that if the city is actually serious about making sure something like Mission Trails doesn’t happen again, it needs to actively engage with and listen to the former trailer park residents. “The people who went through displacement are the experts on displacement,” she said.

Cortez's report is actually a follow-up to findings her group, called Vecinos de Mission Trails, tried to present to the city’s housing commission last year. Cortez says the group asked to make a presentation, but commission members only gave them some extra time at a citizens-to-be-heard portion of a meeting. The new, 100-page report (which you can read here) is now slated for discussion at the commission's next meeting, on May 16.

In some ways, the report is a manifesto on the forces of gentrification that led to Mission Trails, a detailed examination not just of the hardships faced by residents forced to leave their homes but also the public policies that made it possible.

Cortez argues that the Mission Trails episode didn’t happen in a vacuum. Dial back to 2010 when the city created its Inner City Reinvestment Infill Policy (often referred to by its somewhat ominous-sounding acronym ICRIP), which identified large patches of land inside Loop 410 where the city would give developers fee waivers, tax abatements, grants and loans – a map that just so happened to mirror one showing income inequality, essentially priming some of the city’s lowest-income neighborhoods for publicly-subsidized redevelopment. The city eventually created Centro Partnership, a private-public entity created to cheerlead downtown redevelopment. By 2012, the council approved a new Center City Housing Incentive Program to encourage condo and apartment construction in the central city through tax reimbursement grants, utility fee waivers, and a more streamlined process for redevelopment (the developer that bought Mission Trails is slated to receive some $1.8 million in CCHIP assistance).

But redevelopment for whom? “When we talk about revitalization, we need to be talking about human bodies, people who live in and around these neighborhoods, and not just buildings,” says Christine Drennon, an associate professor of sociology at Trinity University who sat on the city’s gentrification task force. It’s cases like Mission Trails, she says, that make some longtime residents skeptical of big, “transformational” projects to remake downtown – like the millions of public dollars now slated to rehab Hemisfair, which, when originally built for the 1968 World’s Fair, bulldozed a working-class neighborhood and displaced some 1,200 people.

“A lot of people are afraid that these new things, these new developments will actually hurt them,” Drennon says. “But that’s not where the attention is, on the people this city was built on, but rather the new, the new faces, the new money pouring into these old neighborhoods.”

Rogelio Saenz, dean of the College of Public Policy at the University of Texas San Antonio, says he reviewed the Mission Trails report and provided feedback for its authors before they finalized it. “How the people were uprooted there, it’s very typical of the patterns of gentrification that we find not just here in San Antonio but across the country,” he said. He called it a critically important document that he hopes city officials pay attention to, “a document that provides a historical account, gives the historical basis for what happened to these people and what happened afterward – so that they don’t become invisible.”

It's unclear how much weight city leaders will give the report and its recommendations, even as they continue to face the problem of residents displaced by trailer-park flipping in other parts of town. District 8 Councilman Ron Nirenberg, a leading candidate in Saturday's mayoral election, has dealt with similar issues in his own district. He voted for the 2014 rezoning change that ultimately booted the Mission Trails residents, but he also stood outside the old trailer park gates this week as Cortez and other researchers announced the report and residents explained the hardship they've faced in the years since the move. Nirenberg conceded that "knowing what we know now," his vote was a mistake. Manuel Medina, another frontrunner in the race who was also present, called the episode "another sign we need to fire our current mayor and city manager."

Mayor Ivy Taylor, who as a council member supported the rezoning, didn't show at the press conference but sent us this prepared statement in response to the report: “Mayor Taylor is moved by the plight of the former Mission Trails residents. She’s working to strengthen San Antonio’s vulnerable neighborhoods through the SA Tomorrow master plan – to ensure residents can stay in their homes despite pressures from a heated real-estate market.”

Meanwhile others, like District 3 Councilwoman Rebecca Viagran, appear to have simply written off the report — or at least its timing — as a political stunt. Viagran, who represents the area, has been heavily criticized by former park residents and activists because she supported the zoning change. Viagran, who also didn't show at a press conference announcing the report this week, told the Rivard Report that clearly its "goal is to influence an election" rather than solve any problems.

That's because one of the candidates challenging Viagran in Saturday's election, longtime local activist Jessica Guerrero, was one of the researchers involved in the report who interviewed residents and says what happened at Mission Trails is largely what inspired her to run for city council. She says the report underscores that "what happened to them was a rippled-out shitstorm, one that hasn't really ended for a lot of these people."