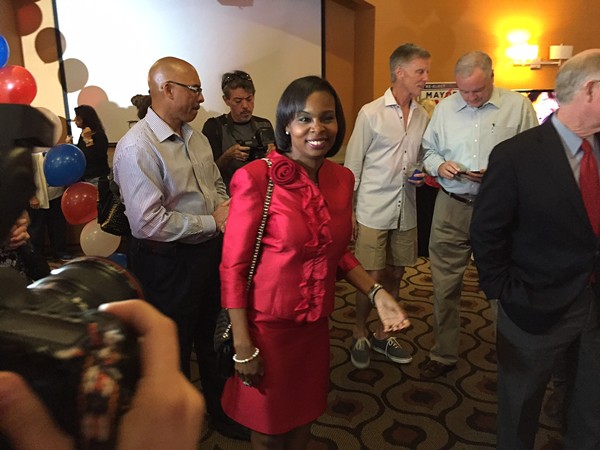 On Saturday night, as election returns made it clear Mayor Ivy Taylor would have to fight to keep her job in a June 10 runoff election, she emerged from an upstairs room at the Wyndham Garden and joined a small group of cheering supporters that had gathered inside a conference room on the River Walk hotel’s second floor.

When she took to the podium, Taylor delivered a line that was somehow both confident and defensive. “So it looks like we’re in a runoff, but we came darn close tonight to winning this race outright with 13 challengers and being on page two of the ballot,” she told the crowd. “We fended off more than our share of falsehoods and half-truths, but we stayed positive to focus on San Antonio’s future.”

“Stayed positive” – past tense. On Monday, as the Express-News first reported, Taylor brought onto the team a new attack dog, longtime Democratic operative Colin Strother, to lead the campaign through the runoff against District 8 Councilman Ron Nirenberg, who came in second with 37 percent of the vote Saturday night compared to Taylor’s 42 percent.

When we reached him by phone Tuesday, Strother made a couple things evident: this new Taylor campaign plans on more heat, fewer question-and-answer forums.

Strother called Nirenberg an “elitist” and “opportunist” who he says is woefully unprepared to lead the city. He labeled the councilman a flip-flopper who’s backtracked on critical votes, saying, "He should change his campaign slogan to 'My Bad.'" Strother even tried to compare Nirenberg to Donald Trump, saying, “He’s taken both sides of almost every issue at this point," before insisting the councilman has had few accomplishments since being elected to city hall in 2013 – that is, except for helping save a Hill Country bat cave from being swallowed by suburban sprawl, which Strother also openly mocked. “So his biggest accomplishment is saving a home where bats live? What about where people live?”

Also: don’t expect Taylor to participate in any more debates or forums heading into the June 10 runoff. That’s because, as Strother put it, “They don’t tend to impact the electorate … I’ve encouraged her to get back to her roots, to spend time talking directly to voters one-on-one.”

Strother’s history with San Antonio politics makes his place within the Taylor camp about as weird as you’d expect for any political consultant/strategist/hired gun in this town. He says he’s in the past worked as a consultant for the local fire union, which has an ongoing grudge with the mayor over stalled contract negotiations and in the first-round election endorsed Manuel Medina, the anti-Taylor in the race who came in at a distant third Saturday night with 15 percent of votes cast. In 2015, Taylor’s last run for mayor, Strother even worked for one of her opponents, former Bexar County Commissioner Tommy Adkisson. (Taylor’s other campaign shot-caller, Christian Anderson, worked for Leticia Van De Putte, the mayor’s main competitor in 2015 who ultimately endorsed her in this year’s race.)

Strother also hinted at which issues might start to take center stage heading into the June 10 runoff. He pointed to Nirenberg’s vote to rezone land on the Mission Reach of the San Antonio River that led to the displacement of an entire trailer park full of people – not because Taylor didn’t support it, too, but because Nirenberg now admits that that vote was a mistake.

Strother also chided Nirenberg over his vote approving the multi-billion dollar Vista Ridge Pipeline project – again, not because Taylor didn’t also support it, but because Nirenberg has since heavily criticized the project as having gone off the rails under the mayor’s leadership. Strother also mentioned Nirenberg’s opposition when Taylor secured a new contract with the local police union last year after years of stalemate, a deal Nirenberg criticized for being fiscally irresponsible and for failing to include any police reforms.

“Ron has turned into a fringe opposition candidate who just opposes things for political expediency,” was how Strother distilled it.

While the Taylor campaign insists she’ll sail to victory in a runoff, the numbers appear to outline a tougher road ahead. As this E-N analysis of elections department data shows, voters opted for Nirenberg in dozens of north side precincts, including in his own council district turf, that went Taylor in 2015. While Taylor picked up supporters in the far west and southeast sides since last election, there are still huge patches of the city’s west and south sides that delivered Medina some 9,000 votes in Saturday’s election.

Which means the election could very well hinge on Nirenberg getting those votes in the runoff. Kelton Morgan, Nirenberg’s campaign manager (who also ran his previous two council races), contends it's pretty clear which way those voters will swing. "Medina voters and Nirenberg voters have one huge thing in common, one huge thing that 58 percent of San Antonio voters have in common: They want a new mayor."