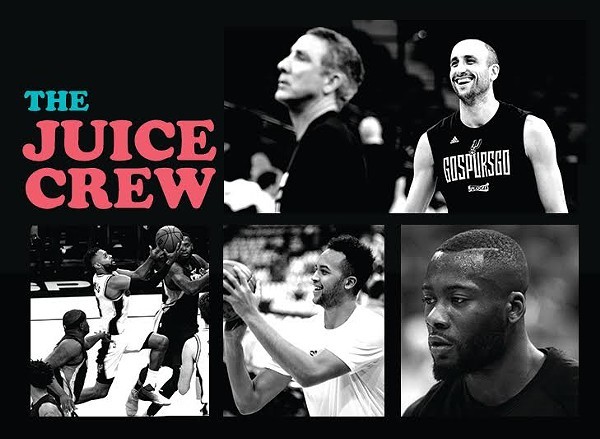 You had the feeling the Spurs’ role players were in for a big night when 39-year-old Manu Ginobili threw down an emphatic dunk in the first half. And when an ankle injury forced Kawhi Leonard out later on, you knew they’d have to deliver one.

Ginobili was one of a few reserves to step up on Tuesday, helping push San Antonio to a hard-fought 110-107 win over Houston. The Argentine finished with 12 points, seven rebounds, five assists and one of the more memorable blocks in Spurs history:

“Manu reached back and gave us one of his Manu performances from past years,” Pop said after the game. “He was a stud.”

Ginobili wasn’t alone. Danny Green had 16 points, outscoring Houston single-handedly in overtime, seven to six thanks to two momentum-swinging baskets. Patty Mills recorded the first playoff start of his career, played 43 minutes and scored 20 points. Jonathon Simmons, who continues to have a tremendous series, had 12 points while playing lockdown defense on James Harden and readily attacking him off the dribble on the other end of the floor.

The Rockets star guard filled the stat sheet once again, with 33 points, 10 rebounds and 10 assists, but he also had nine turnovers. As the game dragged on, the Spurs defense seemed to get better at cutting off his angles, and the Rockets’ full-throttle offense found itself sputtering as a result.

The Spurs rarely looked the part of a well-oiled machine, but they put themselves in a position to win by slowing the pace of the game and grinding the Rockets down with their gritty play.

When it wasn’t Ginobili driving to the rim, it was Jonathon Simmons getting in front of Harden to draw a charge. Or it was Mills throwing himself on the ground after a loose ball with 10 seconds left in the game. Even LaMarcus Aldridge, who had another mediocre shooting night, consistently battled for rebounds, especially on the offensive glass.

Despite both his ankle and knee bothering him, Leonard still led the way for San Antonio with 22 points and 15 rebounds. His absence in overtime was a concern, not only for the result of Game 5 but for his status moving forward. Those worries, thankfully, were quelled shortly after the game, with news that Leonard is expected to play in Game 6.

The Spurs now have a crucial 3-2 series edge, as well a bit of history on their side: the team that takes Game 5 when the series is tied has gone on to advance over 80% of the time. They can close things out in Houston, with Game 6 tipping off on Thursday at 7pm.