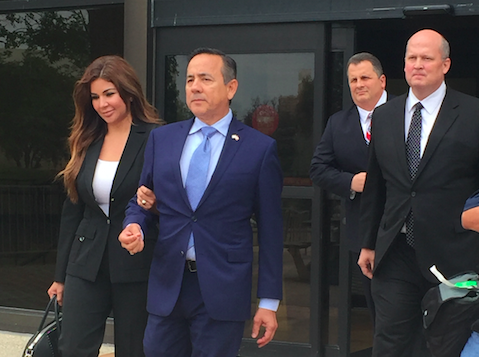 After the feds raided his downtown law office earlier this year, it seemed like just a matter of time before State Sen. Carlos Uresti faced legal trouble for his involvement in a now-defunct fracking company accused of defrauding investors.

So when the feds unsealed criminal indictments against Uresti this week, the surprise was not so much that he'd been charged but rather that prosectors have built another separate case against the longstanding San Antonio lawmaker, charging him in an alleged bribery scandal to secure a private prison contract at a West Texas detention center where inmates have rioted over squalid conditions.

On Thursday, the official that Uresti is accused of helping bribe signed a plea deal with federal prosecutors, as first reported by the Express-News, agreeing to "fully cooperate" in the investigation.

Uresti was charged earlier this week with conspiracy to commit bribery and money laundering alongside Vernon C. Farthing III, president of Physicians Network Alliance, a company that in 2006 was awarded the multi-million dollar contract to provide healthcare for inmates at the Reeves County Detention Center, which largely houses border crossers charged with illegal re-entry.

As we reported earlier this week, civil rights groups have long claimed that inmates in Reeves County suffer from dangerously deficient health care. In 2008, inmates rioted at the facility, setting mattresses on fire and taking staff hostage after an epileptic prisoner died from a seizure he suffered in solitary confinement after complaining that staff had withheld his anti-seizure meds. Carl Takei, a staff attorney with the ACLU's National Prison Project, reacted to the charges this way: "If the allegations in the indictment are correct, then people getting rich off this contract led directly to human suffering inside that prison."

Court records unsealed this week allege that former Reeves County Judge Jimmy Galindo agreed to shepherd PNA's the contract through the local commissioners court (which is in charge of subcontracting out services at Reeves) in exchange for kickbacks and the "promises of future payments" from the company. The feds claim PNA then hired Uresti as a "consultant" for "marketing services" who in reality acted as the middleman for bribe money flowing to the county judge. Prosecutors say PNA and its "successor companies" paid Uresti some $120,000 a year for the past decade, about half of which Uresti then paid out to Galindo.

Lawyers for both Uresti and Farthing have said they look forward to proving their innocence in court.