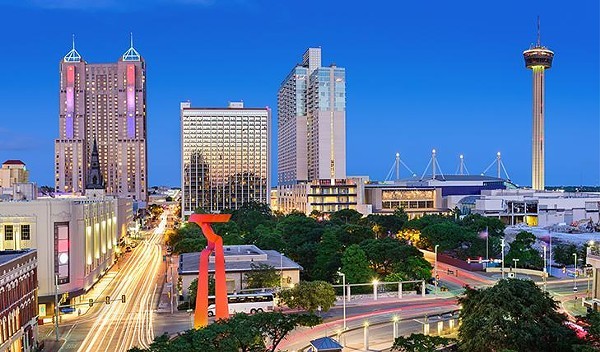 City Council will meet with the city attorney's office in executive session on Thursday to decide whether San Antonio should file a lawsuit to block a new law that could extend federal immigration enforcement into local police departments.

Southside councilman Rey Saldaña, who's been the loudest voice on council opposing the new law, says the item is set for discussion when council meets in executive session, which isn't open to the public, on Thursday following their regular public meeting. If Saldaña has managed to gain enough support for the move, San Antonio would be the largest jurisdiction in the state to sue over Senate Bill 4, which Gov. Greg Abbott signed into law earlier this month over heavy opposition from leaders in the state's major metros.

The law, slated to go into effect September 1, would force San Antonio to scrap its current policy of prohibiting cops from asking about immigration status in routine law enforcement encounters. Many fear the law is so broad that police chiefs, sheriffs and other law enforcement officials would be powerless to stop cops from asking about citizenship during even a traffic stop if they want to. San Antonio Police Chief William McManus was among the chorus of Texas' big-city chiefs begging lawmakers not to pass SB 4, saying it could drive immigrants into the shadows and make them afraid to report crime.

Saldaña started openly pushing for San Antonio to file a lawsuit over SB 4 last week when he and other city officials from across the state rallied at the capitol, calling for a "summer of resistance" against the law. LULAC, Maverick County and the city of El Cenizo, a tiny border town that is likely the state's oldest "sanctuary city," were the first to sue to block the law soon after Gov. Abbott signed it. On Monday, El Paso County officials joined forces with the Texas Organizing Project Education Fund (which is being represented by the Texas Civil Rights Project) in filing a lawsuit to block SB 4, saying the law would violate due process rights and constitutional protections against unreasonable search and seizure. Austin City Council also voted to sue to block the law last week.

If San Antonio's city council approves a lawsuit this week, Saldaña says the city could join forces with the Mexican American Legal Defense and Education Fund, which is currently prepping its own suit against the bill that it plans to file in San Antonio federal court. "If we're going to strike, we need to do it now," Marisa Bono, MALDEF regional council, told the Current on Tuesday. "This law has a big impact not just on immigrants, not just on city residents who will get profiled, but also because a major part of our industry is tourism and this law could genuinely scare people away."

Whether Saldaña faces any opposition to the measure, particularly with a June 10 runoff election looming, is yet to be seen. He told the Current on Tuesday he's confident he has the support to move forward. "I think there's a consensus that we need to act on this now," he said. "I think enough of my colleagues understand that at this point."

Read more about what Texas' crackdown on so-called "sanctuary cities" means in the Trump Era.