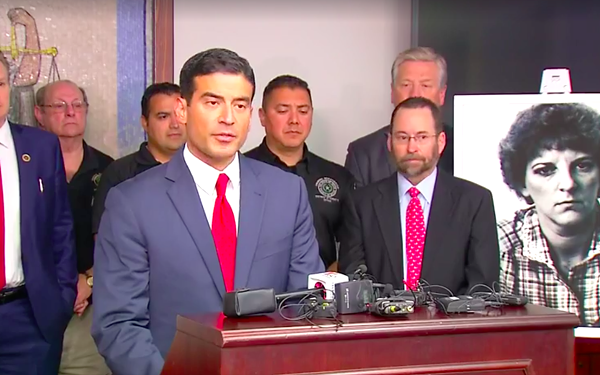 It's been 34 years since a young San Antonio nurse suspected of murdering dozens of infants in her care was convicted for killing a baby girl at a Kerrville clinic. Genene Jones, who the media dubbed the "Angel of Death", was sentenced to 99 years behind bars. But now, with her release from prison pending, county prosecutors have reignited an investigation into other infant deaths potentially linked to Jones.

On Thursday, a Bexar County grand jury indicted Jones, now 66, for the 1981 murder of Joshua Sawyer, an 11-month-old baby who died under Jones' watch.

"Make no mistake, our office’s only focus is seeking justice for families," said Bexar County District Attorney Nico LaHood at a Friday press conference. "Ultimately, true justice will come when she stands before our lord, but until then, we will make sure Genene Jones will take her last breath behind bars."

This isn't the first time a prosecutor has tried to charge Jones for the death of Sawyer. But to understand the Sawyer case, you have first understand Jones' original charges.

In 1982, Jones was a young nurse working in the pediatric intensive care unit at Bexar County Hospital (now University Hospital). According to reporter Peter Elkind, who wrote a book on Jones’ case and broke the story of her indictment Thursday in ProPublica and Texas Monthly, her tenure corresponded with an unusually high number of child deaths in the ICU — 42, to be exact — and the majority of them had occurred under Jones' evening shift, inspiring her colleagues to start calling it the "death shift."

But Jones wasn't officially hit with murder charges until 1983, when she joined a Kerrville pediatric clinic, shortly after being edged out of the county hospital by administrators fearful of bad media surrounding the deaths. Almost immediately, kids treated by Jones began dying at the Kerrville clinic at an unprecedented rate. In a mater of months, Jones was charged and convicted for the murder of 15-month-old Chelsea Ann McClellan, who died after Jones injected her with a powerful muscle relaxant instead of routine baby shots. She also received a separate, 60-year sentence for injury to a child in the case a one-month-old baby named Rolando Santos.

These convictions inspired the Bexar County DA at the time, Sam Millsap, to dig into the other unsolved infant deaths Jones left in her wake, including Joshua Sawyer's. Sawyer had died during Jones' county hospital "death shift" in 1981, after being injected with a sedative drug called Dilantin. Millsap was determined to pin the death on Jones, but he hit a wall when no staffers could confirm Jones was the nurse who actually administered the Dilantin injection. There were no witnesses. Millsap closed the case, telling reporters, “No useful purpose will be served. I think she will spend the rest of her life in jail.”

But, because of a 1977 law granting all inmates a dramatically truncated sentence for good behavior, Jones is now up for parole in March 2018, 65 years before her original release date. (That law was changed in 1996 to allow officials to block certain offenders from being eligible for this rule — but it can't be applied retroactively.) This unexpected change inspired the DA's office to go back to the drawing board.

"The possibility of this individual suspected of killing several dozen infants to be set free was shocking to many," said LaHood, who got caught up on the case shortly after entering office in 2015. Since then, he said, his office has quietly been scouring through 30-year-old court records and testimonies to cobble together a brand new case (there is no statute of limitations for murder).

"I feel we have a good case," LaHood said. "If we didn't think we had enough information, we wouldn't have presented this case to a grand jury." He told reporters he's "absolutely certain" Jones is guilty of killing more than one child, and his office is continuing to investigate "dozens" of other deaths.

LaHood didn't go into detail on just how his team will successfully try a decades-old case — but it's expected to kick off before Jones' March release date. He said there's a chance she could be released on bond pending the case, but it's "not very probable at all." Asked how Jones took the Thursday news of her indictment, LaHood replied: "She was emotional."