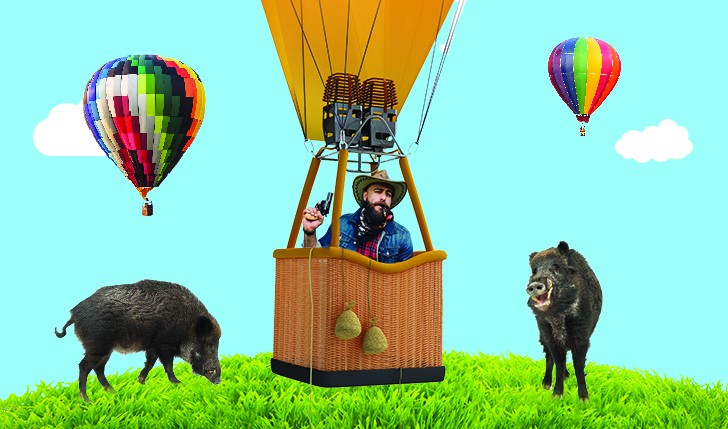 As state lawmakers gut major bills in the last days of the 85th legislative session, it's become clear where many of their priorities lie. Child welfare. Religious freedom. Women's health.

That last one, oddly enough, is one of the few issues that have managed to float through both chambers unscathed. Thanks to a Wednesday vote by the Texas Senate, a bill allowing landowners to shoot wild hogs and coyotes from the safety of a hot air balloon basket has now landed on Gov. Greg Abbott's desk.

The state's estimated 2 million feral hogs have long-tormented Texas farmers, leaving destroyed crops and pastures in their wake. This bill is only the latest strategy in a growing list of legal ways to kill these invasive hogs under Texas Agriculture Commissioner Sid Miller's watch. Balloon-hunting, actually, is a fix to a bill then-Representative Miller passed in 2011, which allowed property owners to shoot hogs from helicopters (he called it the "pork chopper" bill). But according to aerial hog hunters, their prey have become familiar with the buzzing helicopter motor and often scatter when they hear a chopper approaching. Plus, they complain, it's near impossible to keep a steady aim on a bumpy helicopter ride.

“We’ve got a problem here, and we are willing to fix it ourself. We have that Western, swashbuckling, cowboying type of way to deal with things," Representative Mark Keough, a Woodlands Republican, told the Texas Observer in April. "It’s part of the culture, it’s different than any other state.”

Keough has never tried the kind of "swashbuckling" hunting his bill allows. That's probably because it's illegal — but also because absolutely no one hunts hogs from hot air balloons. It seems to be an idea Keough basically invented himself. The bill provides no information on how a person can rent a hot air balloon for a hunting excursion (unless you're throwing down some $22,000 on a personal huntin' balloon), or if they need to take a certain certification class before taking flight.

Either way, the majority of Texas legislators apparently think it's a good idea.

Commissioner Miller's office didn't return calls for comment Thursday and his wildly active social media accounts lack any acknowledgement of Keough's bill. This silence, coming from a man who once called for a Texas-sized "hog apocalypse," is a bit surprising.

It could be Miller's still sulking after his own hog eradication scheme fell flat in April. Miller was met with quick opposition after legalizing the use of posion-laced hog kibble in February. An unusual coalition of hog hunters, meat processing plant owners, and environmentalists filed a joint lawsuit against the state, claiming too little was known about the toxic chemical's affects of humans and the environment to approve. The law has been put on hold, and the one toxic hog kibble provider decided to stop selling to Texas after being slammed with a barrage of lawsuits.

If signed by Gov Abbott, Keough's bill will go into effect in September.