Your Annual Poop Alert for Visiting the Gulf 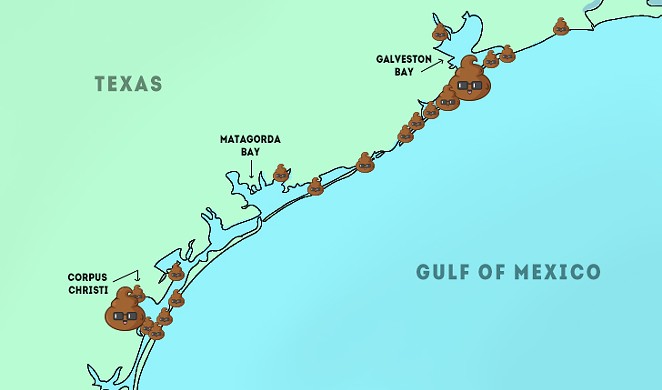 Several areas in the Corpus Christi and Galveston bay areas have tested for high levels of fecal bacteria, which is really no surprise, but something that beach-goers should probably be aware of this Memorial Day Weekend.

During the peak summer months, the Texas General Land Office collects samples from 67 recreational areas along the Texas coast, and no matter what, there's always some amount of fecal bacteria. It's an unavoidable fact that the ocean acts as our, ehm, toilet. Sewage treatment plants, septic tanks, storm water runoff, and boating waste, not to mention animal waste, all contribute to the dirty state of affairs.

Only when bacteria levels are elevated does a beach go on red alert. Then, local authorities might choose to close it until levels have dropped again. So far, no beaches have been closed this season. The GLO's online app pinpoints exact locations and bacteria levels.

Beachers should be aware that ingesting ocean water is never a good idea. Gulping the gulf increases the risk of catching a number of recreational water infections, according to the Centers for Disease Control.

Besides your standard fecal-related ocean diseases, last year there was a spike in the terrifying (but very rare) Vibrio vulnificus, which can cause flesh-eating infections. According to a report from the Texas Department of State Health Services, cases of vulnificus have been on the rise for years. Last year, there were 35 in Texas. The GLO's beach alerts don't give information on this the disease, but it's also associated with warmer temperatures and saltwater.