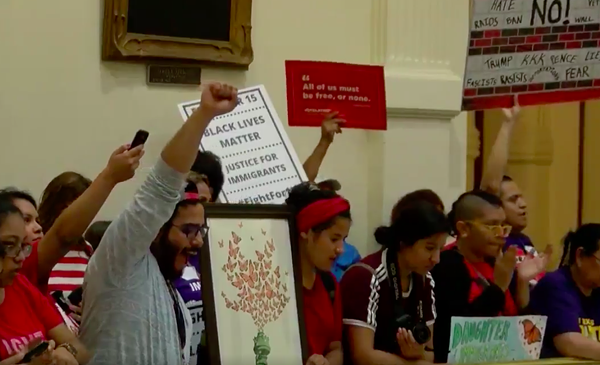 The last day of Texas' 85th legislative session ended with a bang — almost. Shortly after reporting capitol protestors to immigration officials, a state lawmaker threatened to shoot a fellow legislator in the head.

It began (and ended) with Rep. Matt Rinaldi, an Irving Republican, who was clearly irked with the number of people who'd showed up at the capitol Monday to protest Senate Bill 4, the legislation that extends immigration enforcement to local police departments. By 10 a.m., hundreds of peaceful protesters waving anti-SB4 posters and chanting "here to stay" had crowded the capitol's halls and the Texas House gallery — and lawmakers had noticed.

Democratic Rep. Philip Cortez told the Washington Post he and other lawmakers were talking about the protests on the House floor when Rep. Rinaldi let them know he'd called U.S. Immigration and Customs Enforcement officials on all the protestors (Rinaldi posted on his Facebook that he only called to report the people holding signs that read, "I am illegal and here to stay").

This sparked a brief scuffle between Hispanic lawmakers and House conservatives, who both claim the other threatened them with violence on the House floor. Here's KVUE's recording of the clash:


"There was a threat made from Representative Rinaldi to put a bullet in one of my colleagues’ heads,” said Democrat Rep. Justin Rodriguez, in a press conference held by House Democrats after the tussle. Rinaldi, however, claims that it was actually his life that was threatened on the house floor by Rep. Poncho Nevárez and that he was just letting Nevárez know he'd "shoot him in self-defense."

El Paso Democrat Rep. César Blanco said he informed Rinaldi that his own Italian ancestors were also immigrants. "[Rinaldi] said, 'the difference between me and them is that I love this country,'" Blanco told the Texas Tribune.

There's no audio of the confrontation, which had to be broken up by Texas Department of Public Safety troopers, to confirm either allegation. But it was enough for Rinaldi to request DPS protection.

San Antonio Rep. Diego Bernal stepped in to try and pacify the confrontation on the House floor. No punches were thrown, he told the Current, but Rinaldi's words still left a mark. "He said the protestors hated America, so 'fuck them,'" Bernal recalled. The most "insidious" part of Rinaldi's threat was that the crowd of protesters included kids and their parents at risk of deportation.

"It reveals what proponents of SB4 really wanted," he said. "Which includes the callous lack of regard to children and families."

But the Monday clash didn't happen in a vacuum. Bernal said it was the result of the simmering tension between House Democrats and Republicans over the SB4 vote. "After SB4, nothing was the same," he said.

While SB4 was signed into law by Gov. Greg Abbott earlier this month, the law's opponents have promised a "summer of resistance" to continue protesting and filing lawsuits against the measure.

Already, El Paso County, the border town of El Cenizo has sued the state for the bill's unconstitutionality — and the cites of Austin, Houston and San Antonio are expected to announce their own lawsuits against SB4 in the coming weeks.