Nathan Cooper was housesitting for his parents on April 19, 2015 when his older brother Norman showed up at the far northeast side home at around 2 a.m. acting strange, sweating profusely and shouting at his little brother. Nathan figured he was on something (he'd damaged the door trying to get into his house), so after texting his parents, he dialed 911 hoping police could calm the situation and get his brother some help.

San Antonio Police Department officer Oliver Flaig arrived first and saw Norman yelling and standing in the hallway. “I’m trying to save my brother,” Norman told the officer, according to court records. “He’s been sinning.” Flaig's response: "Shut the fuck up."

When another SAPD officer, Arnoldo Sanchez, arrived as backup, the cops followed Norman upstairs so he could grab his ID. Nathan was still downstairs and had just called his father to tell him police had arrived when he heard loud scuffling coming from the second floor. Over the next three minutes, officers Flaig and Sanchez would use their Tasers on Norman at least nine times.

In statements to investigators after Norman’s death, which a medical examiner blamed on methamphetamine intoxication “complicated by a prolonged struggle,” the officers claimed Norman had grabbed a laptop computer and feared he might use it as a weapon. They said their attempts to de-escalate the situation “were not permanently successful,” and that Norman refused commands to get on the ground and put his hands behind his back. A medical expert's report filed in court last month in a federal lawsuit against SAPD and the officers involved that morning calls their actions “grossly negligent” and blames the death on their “deliberate indifference to the welfare and safety of Norman Cooper.” (City and SAPD officials wouldn't comment on the case this week.)

In late March, Norman’s parents spoke about their lawsuit to a small group of East Side community activists, lawyers and concerned citizens who had gathered at the Mount Zion First Baptist Church to talk about what the powers at City Hall have – and haven’t – done on the issue of police violence. Inside the small room were current and former members of Mayor Ivy Taylor’s task force to build trust between police and policed, a group Taylor formed after a bitter contract negotiation process with the police union that produced no disciplinary reforms at the department and angered local activists.

“This keeps happening,” Noble, Norman’s father, warned the group as he and others in the room pointed to what they consider dark spots in SAPD’s recent past. They talked about the case of Rogelio Carlos, who in 2014 was mistaken for a suspect and got beaten so badly by San Antonio cops that his doctors recommended spinal surgery that left him paralyzed. There was still anger over Antronie Scott, an unarmed man shot to death by an officer who mistook his cell phone for a gun last year. They spoke about the police shooting death of Marquise Jones, a case that many activists and civil rights lawyers who handle police violence cases say highlights problems with accountability at SAPD and calls into question how the department investigates its own. “We’re all at risk because it’s continuing to happen," Noble said.

What's even worse, according to Noble and others in that room, was that none of the major candidates for mayor or city council would even talk about any of this as election season came and went.

As Mayor Taylor and challenger City Councilman Ron Nirenberg enter the bitter end days of their June 10 runoff race, not much has changed on that front. That’s despite plenty of headlines that hint at larger problems Black Lives Matter activists have been struggling to highlight here for more than two years – like the federal trial over SAPD’s bizarre handling of a police shooting case, problem officers that SAPD Chief William McManus literally cannot fire because of protections embedded in the local union contract, or even a video that shows a San Antonio cop punching a 14-year-old girl in the face during a confrontation outside a quinceañera last month (in prepared statements, Taylor called the video "hard to watch," while Nirenberg said it was "unsettling"; both say they're waiting for police to investigate before commenting further).

To people like Johnathan-David Jones, a police reform activist who's helped lead marches at City Hall and sits on Taylor's community-police task force, these are specific examples of longstanding problems that will never be addressed if politicians aren't forced to discuss them when running for office. "It's as if we still haven't admitted there are any problems here," Jones told the Current. "It really trips me up. We've been patient. We've been trying to talk to them about this for, like, two years. Where have we gotten?" 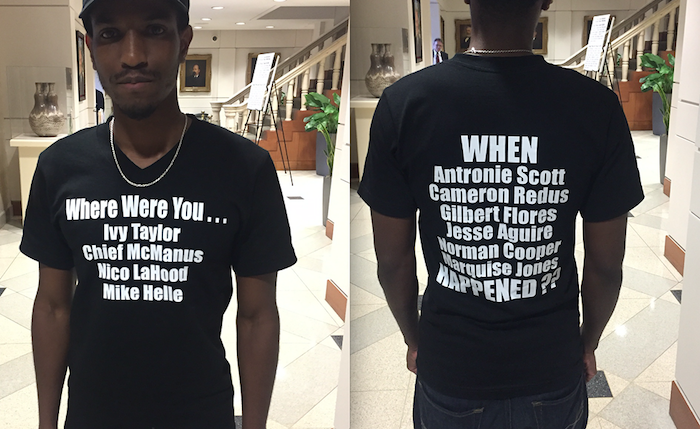 It's not as if policing hasn't entered the mayoral race. Last week, the San Antonio Police Officers Association endorsed Taylor for her work on a contract deal that gave the union just about everything it wanted last summer — a 17 percent wage increase, no healthcare premium costs, and no new reforms to the department's disciplinary procedures. Nirenberg was one of two council members to vote against the contract, saying at the time that it carried none of the "benefits and accountability that our public safety and residents deserve."

Yet what Taylor and Nirenberg have successfully avoided talking about on the campaign trail are some of the issues that got 97 percent of police union members (roughly 2,000 San Antonio cops) to sign onto a report last year saying they had no confidence in Chief McManus' ability to lead his department. In that report, union members expressed outrage that McManus would fire an officer for shooting and killing an unarmed man (a decision the chief ultimately reversed) and, more generally, might consider reforms that union officials claim “endanger the lives of police officers.”

The approach by Mayor Taylor (whose campaign has refused to grant us an interview with her throughout the race) has largely angered and frustrated activists like Jones who want the city to take police accountability more seriously. Jones says that's because Taylor's task force has so far failed to even address the specific issues that brought activists like him to the table in the first place — like the fact that cops here are more likely to use force against people of color, might beat you into paralysis if they mistake you for a suspect or might shoot and kill you if they think your cell phone's a gun. Jones says the union contract has basically become an off-limits issue in those task force meetings.

Taylor told us earlier this year that she hoped the task force would in part help educate community members on the good work that is being done at SAPD, a sentiment that Chief McManus and other city officials have largely echoed. Union officials (who wouldn't respond to our calls for comment this week) have in the past said they want the task force to educate citizens on how to properly interact with cops. Among the task force's recent recommendations: a public education campaign with the catchphrase "Comply Now, Complain Later."

As Jones puts it, "They claim they're trying to solve problems they won't even admit exist."

Jones isn't particularly thrilled with Nirenberg when it comes to issues of police reform and accountability either. Jones says Nirenberg's campaign reached out to him not long after the councilman announced his candidacy for mayor, and says that he's even met with Nirenberg several times to discuss issues around policing. Nirenberg's campaign director Kelton Morgan said the candidate won't discuss the matter with us because the councilman "doesn't want to politicize the issue."

Here's how Jones characterized those meetings with Nirenberg: "While Ivy doesn’t think this stuff is politically beneficial to talk about, Ron, I’m afraid, still doesn’t really get it."

Matthew Gossen, one of the attorneys representing the Cooper family in their lawsuit against the city, says the recommendations from Taylor's task force that city council is supposed to consider later this year are underwhelming — particularly considering the kind of police misconduct that continues to generate headlines here. "Our local political leaders will require the
gumption to make tough, controversial decisions along with the will to
persevere through extreme criticism and backlash to make a true positive
change," Gossen told us.

Gossen argues Norman Cooper's death could have been avoided had officers simply followed SAPD's own policies and procedures that morning in 2015. He also says that if politics continues to snuff out discussion around police reform, there will be more cases like Cooper's in the future.

When he walked upstairs to check on the noise that morning, Norman's brother says he saw him “on the floor gasping for air” with his hands cuffed and an officer on top of him. When Norman became unresponsive, a female cop who’d arrived as backup came into the room, shined a flashlight on his pupils and said “he’ll be fine,” according to the brother's statement. He claims other cops in the room even joked with the woman – Oh, so you’re a doctor now? The brother told police he was upset the cops were laughing, “just standing there.”

Someone would pronounce Norman dead a half hour later.