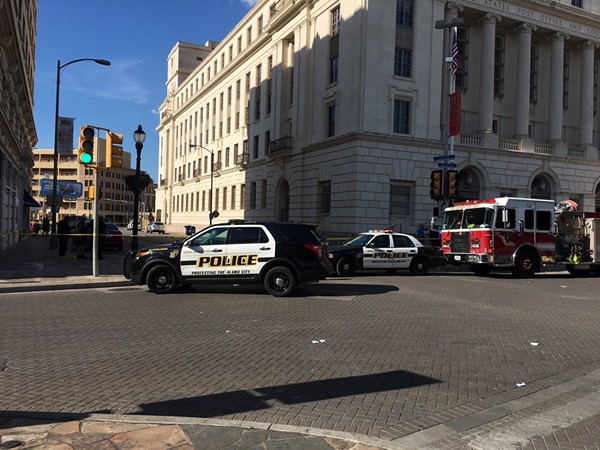 Police officials blocked the downtown streets around Alamo Plaza Wednesday afternoon and detonated a suspicious package outside the Hipolito F. Garcia Federal Building after it was flagged going through the building's security check.

SAPD Chief William McManus told reporters on the scene that federal officials were handling the investigation into the incident. McManus did confirm that officials have three men in custody and that the "suspicious" package turned out not to contain any explosives. The Express-News quotes unnamed law enforcement sources saying that the three men were foreign nationals who had attempted to mail the package at the post office inside the downtown building. It's unclear at this point why they're being held.

An SAPD news release said the department only provided "perimeter security" during the incident and asked people in stores around the building to stay inside and close their doors before officials blew up the package. The Express-News has video of the detonation.

Abel Alvarado says he working at Cthulhu Custom Tattoos downtown Wednesday afternoon when he heard what he thought was a series of minor explosions coming from Alamo Plaza. Both curious and worried, he walked toward the sound and encountered local police and federal agents shooing people away from the federal building, which is at the north end of Alamo Plaza. That's when Alvarado says he heard another explosion, felt the ground shake (nothing huge, but what he called "a little rumble") and then saw a small plume of smoke rising from the east end of the federal building.

Wind carried debris from whatever had just blown up across the street to where Alvarado was standing. He picked up a piece — it looked like a torn page from a magazine. "It was just paper," he said of the explosion. "Like they just blew up some homeless dude's bag or something."