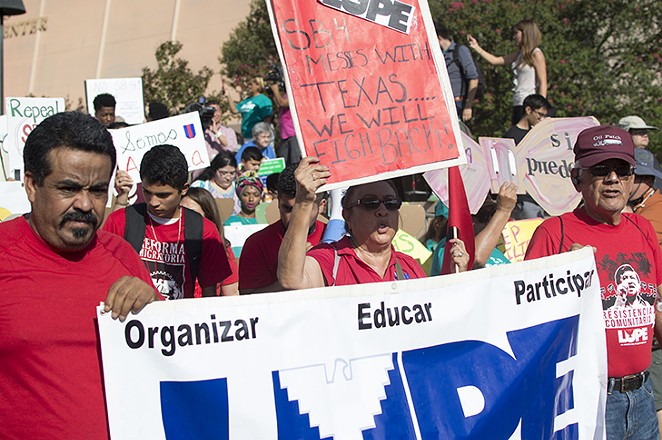 U.S. District Judge Orlando Garcia heard arguments Monday on how Texas’ new immigration enforcement law could cause irreparable harm to the cities, counties, and communities it targets. The preliminary injunction hearing, which took place in San Antonio’s Federal Courthouse, was the first court appearance for the growing number of plaintiffs who’ve sued the state over Senate Bill 4, which was signed into law by Gov. Greg Abbott in May.

The law would allow local law enforcement to ask legally detained people about their immigration status and punish law enforcement officials if they don’t cooperate with federal requests to hold undocumented immigrants they detain — whether or not they actually committed a crime. If a local official is found advising staff to ignore these requests, they could be fined for up to $25,500 for each infraction (if they aren’t fired first). Monday’s hearing was only to ask Judge Garcia to keep SB 4 from taking effect until the trial is over, instead of Sept. 1, the law’s current rollout date.

Meanwhile, attorneys representing Texas and the U.S. Department of Justice, which submitted a legal filing in support of the new law last week, dismissed the plaintiffs' arguments as "red herrings." However, under questioning by Judge Garcia, they offered few answers to the litany of questions that remain over the law, such as who, exactly, is subject to these massive fines or when an officer is officially "detaining" someone. Overall, the hearing provided a first look at a legal case that could define how local cops are expected to cooperate with federal immigration enforcement in the Trump era.

A central argument Monday was whether or not it's the state’s job to execute federal immigration law. While state attorneys claimed nothing in SB 4 requires cops to do the job of U.S. Immigration and Customs Enforcement agents, one provision of the law punishes local law enforcement officials if they don't detain whatever immigrants if ICE asks them to (currently, it’s voluntary for cops to comply). Some see that as doing ICE’s job.

“This law has gone from voluntary to draconian,” said Collyn Ann Peddie, an attorney representing the City of Houston, referring to the current voluntary nature of ICE’s detainer requests. “You just can’t substitute local people, shanghaied by state, for ICE agents.”

Other plaintiffs mentioned the bill’s potential threat to public safety.

“I do not believe Senate Bill 4 can effectively protect citizens of El Paso,” said Jo Anne Bernal, the lead attorney for El Paso County. “Frankly, I think it will create a less safe community.”

It’s a refrain that’s been echoed throughout Texas’ law enforcement community: Why would an undocumented immigrant risk reporting a crime if they or their family could be asked for proof of citizenship? It’s a public safety threat that Bernal said has already begun to play out in her county. She’s seen a significant drop in the number of people who come to her office seeking protective orders from abusive family or partners in 2017 compared to past years. It didn’t help that an undocumented woman was arrested in February by ICE agents in the county’s protective order court, shortly after getting a restraining order against an abusive boyfriend.

Dallas city attorney Charles Estee echoed Bernal’s concerns, especially in the wake of the 2016 shooting of four Dallas police officers. “In Dallas, we’re approaching the one year anniversary of when we lost four officers,” Estee said. “Instead of adding tools to help these police department, Senate Bill 4 will deprive cops of the ability to build trust.”

Multiple attorneys argued that threatening cops with colossal fines for disagreeing with the “vague” law violated the First Amendment, and would have an equally chilling effect among officers who don’t want to act as ICE stand-ins.

“Texas is painting the law as a modest law that does very little. But jail time for police officers? That’s not modest,” said Lee Gelernt, an American Civil Liberties Union attorney representing the border town of El Cenico. “The penalties are so harsh, it would be unrealistic for any police officers to take a chance.”

It works both ways, according to San Antonio City Councilman Rey Saldaña. Asked on the stand if he thinks that under SB 4, San Antonio police officers will take time out of their normal work to conduct immigration checks, Saldaña gave this answer: “Unfortunately, I do.”

During witness testimony, Houston Representative Ana Hernandez wiped away tears as she recalled growing up with undocumented parents. During the recent Texas legislative session, Hernandez said she met two girls who asked her to keep their parents from getting deported, “just like my sister and I,” she recalled. She said the April debate over SB 4 quickly became racially divided on the House floor with conservative Representatives using the word “illegals” in a derogatory way — and she believes the law will normalize racial profiling.

The state’s reply to this litany of concerns? Denial.

“The bill is simply not vague. There’s no racial focus in Senate Bill 4. We are not trying to enforce immigration law,” argued Brantley Starr, an attorney representing the office of Texas Attorney General Ken Paxton. Starr and fellow AG attorney Darren McCarty called SB 4 a “modest law” that created needed uniformity across the state for immigration policies. But, he added, the law simultaneously has nothing to do with immigration.

“Senate Bill 4 does not suggest that asking for identification is related to immigration at all,” McCarty told the court.

Judge Garcia peppered the state and plaintiff attorneys with specific questions about the broad law throughout the case — many of which remained unanswered. But he broke his serious demeanor multiple times throughout the case, especially when Bexar County Judge Nelson Wolff took the stand. Asked what would happen if he spoke out against SB4 after it became law (something he said he’s likely to do), Wolff said: “I’d be fine with being removed from office if the governor was removed for passing unconstitutional voting and redistricting laws.” Garcia struggled to hide an obvious laugh behind his hand.

At the hearing’s end, the judge gave no timeframe for when he expects to have a decision on the injunction request.