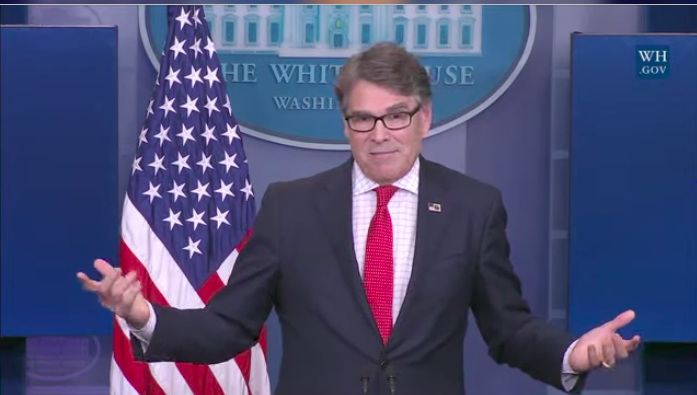 Despite all the jokes — like poking fun at reporters for asking complicated questions he couldn't understand and saying he wants to "make nuclear energy cool again" — Perry gave the press corps a message fraught with contradictions regarding climate change.

"Climate is changing. Man is having an impact on it," Perry said Tuesday. Yet at the same time, the same time, he encouraged people to challenge the solid scientific consensus surrounding climate change and consider the "other side" of the issue.

"The science isn't settled yet," Perry said. "The idea that we can't have an intellectual conversation about just what are the actual impacts of climate change...Let's just talk about it, what's wrong with that?"

Despite the heaps of global research on these impacts, this a coded line of questioning that many Republicans in Congress lean on, particularly Texas' own Lamar Smith, the chair of the House science committee who's accused multiple government agencies of falsifying climate change data. Many of these lawmakers' elections have been bankrolled by oil and coal companies.

Since Perry claimed to believe in climate change, a reporter asked if the "conversation" he mentioned would be about how to combat the growing threat.

"Sure, is that okay?" Perry responded.

This blurry response comes a week after Perry told CNBC that the "primary control knob" for the earth's temperature is the ocean, not human activity.

The former Texas governor also backed Trump's decision to pull out of the Paris Climate Accord, channeling the president's "American First" attitude in explaining why.

"The U.S. already leads the world in lowering emissions," he said. "We've done this with innovation and technology, not by signing agreements."

But it's unclear how the country will continue lowering carbon emissions under the DOE's game plan. The Trump Administration wants to achieve "energy dominance," according to Perry. That mission means shifting the country's focus on growing renewable energy back toward to gas, coal, and nuclear.

Though he applauded Trump's decisions regarding climate change, Perry admitted that he has yet to discuss the topic with the president. And he, like other cabinet members, definitely doesn't know what Trump's stance on climate change actually is. The only cemented statement Trump's made on the topic is that climate change is a hoax invented by Chinese business leaders.

Perry ended with a jab at California. He suggested that any businesses that don't want to follow California Governor Jerry Brown's commitment to the Paris Climate Accord can move to Texas.

Just not the state's largest cities. Perry failed to mention that Dallas, Houston, Austin, and now San Antonio have also agreed to the international climate agreement, even if the feds now don't.