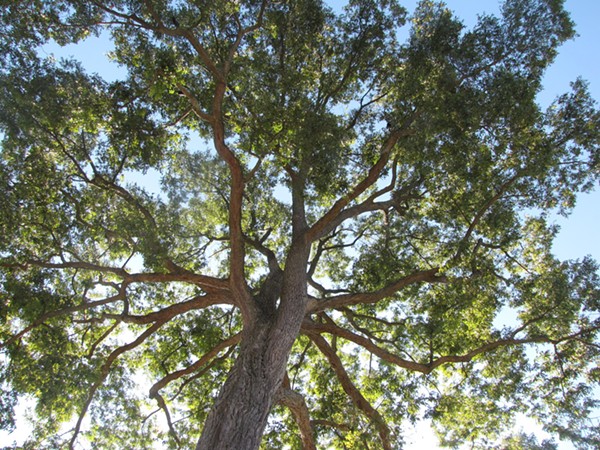 "While it suggests there is a fundamental problem with tree ordinances observed by local communities in the state, in truth, there is not," Nirenberg writes. "This is the legislative equivalent of shouting ‘fire’ in a crowded theater. San Antonio’s tree ordinance is balanced to meet both private and public interests."

His upset began in 2011, when then-Attorney General Abbott decided to tear down his 4,540-square-foot West Austin home and replace it with a larger four-bedroom house and in-ground pool. But his plan was thwarted by two massive, old pecan trees. According to a 2010 Austin ordinance, these trees were considered "heritage" for being larger than 24 inches in diameter — and for being the state tree of Texas. This meant Abbott was required to protect these trees from being harmed by the construction. He didn't.

Instead, Abbott let construction equipment fatally damage the root system of one of the trees, only letting the city know when he asked officials if he could remove the dying tree. Somehow, the city allowed him to remove three additional heritage trees from his property, without asking for the standard $2,000 per tree fine for each removal. That is, as long as he planted a new tree for every one he removed. He really didn't want to do that.

"This is your dirt. These are your trees. You should be able to do with them what you want," he told a cheering audience Monday at a Texas Public Policy Foundation event to kick off the Texas Legislature's special session.

Aside from decrying the California-cation of Texas, Abbott seemed to be the most worked up over city tree ordinances in his pre-session address at the conservative think tank. The idea of replanting or maintaining trees for the good of the environment or city, he said, is "socialism."

When Abbott first unveiled a list of 20 special session priorities that included "preventing cities from regulating what property owners do with trees on private land," few understood why. It definitely wasn't brought up in the regular legislative session, like property tax and bathroom-related issues that were listed alongside it. But it seems Abbott's beef with city tree laws pushed him to a breaking point. He even wrangled Attorney General Ken Paxton (via Sen. Donna Campbell's request) to publish an opinion last week on the legality of a tree preservation law like Austin's. To Abbott's delight, Paxton wrote that municipal tree laws like Austin's went against the Texas Constitution.

Tomorrow, the state legislature will meet to hash out bills to research Texas' skyrocketing rate of maternal mortality, fiddle with public school finances, and green light automatic voter registration. But it's clear what Abbott's most concerned about.

"It's nonsensical," Abbott called tree rules Monday. "And it must end!"