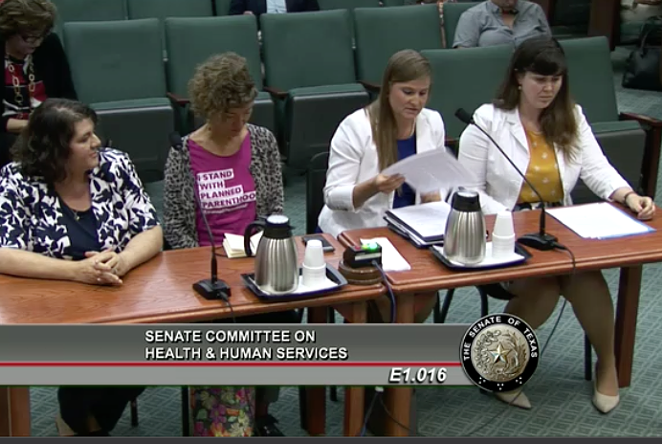 One, Senate Bill 4, would prohibit any federal dollars from going to a health clinic that provides abortion or any other organization that even "affiliates" with that provider. It's already illegal for any taxpayer dollars to pay for an abortion procedure. But Sen. Charles Schwertner, the bill's author, said that any money that goes toward these facilities  — even if it pays for HIV testing, birth control prescriptions, cancer screening, prenatal care or a pap smear — is a form of "subsidizing abortion."

While Schwertner dodged saying it outright, this law specifically targets Planned Parenthood clinics in Texas, since they focus on offering health care to low-income women relying on Medicare.

At the Friday hearing, both Democratic Senators and members of the public explained how Planned Parenthood doesn't just exist to offer abortions.

"I believe Planned Parenthood has prevented more abortions than they've performed abortions," said one women testifying against SB4. "That's what the concept of planned parenthood is all about."

Harris County Sen. Borris Miles told Schwertner he was concerned this bill would halt his community's work to decrease the skyrocketing HIV rate in his district.

"So this bill will stop Planned Parenthood from educating my community on HIV or abortion or safe sex?" Miles asked. "If the City of Houston wanted to educated people on the Zika virus with Planned Parenthood resources, they couldn't do this?"

Schwertner couldn't give him a straight answer.

Anti-abortion advocates testifying at the hearing argued that taxpayers' 'conscious' should come before funding low-income abortions.

The second anti-abortion bill given a green light, Senate Bill 10, requires state abortion providers to report any kind of complications with an abortion procedure to the Department of State Health Services within 72 hours after the incident. Abortion providers are already required by law to report these incidents within 30 days, but abortion foes say the more expedited process will make sure there are no reporting errors.

This is because anti-abortion groups don't trust the data already coming from these clinics, because it is clear evidence that abortion is an extremely low-risk procedure. Maybe if doctors are made to report more frequently, argued Joe Pojman of Texas Alliance for Life, they will get more accurate data. There's no research showing that the current reporting method is at all flawed (meanwhile, a woman is 14 times more likely to die from complications related to a pregnancy than an abortion).

Pro-choice opponents of the bill say it's just another tool used to mislead women and the public into believing legal abortions are less safe than they really are.

"This bill only further stigmatizes abortion," said one woman testifying. "It's scare tactics over a problem that doesn't exist."

SB 10 would also require the reporting doctor to include the patient's race, age, marital status, number of previous abortions, and date of last period. It's a requirement that doctors familiar with medical privacy laws say is unnecessary — if not illegal. Others see SB10 as just another way to intimidate abortion providers and take their time away from actual health care.

"Let's face it," one testifier said. "The goal of these bills is to limit abortion access in Texas."

Committee Senators voted on party lines to move both bills forward to the full Senate.