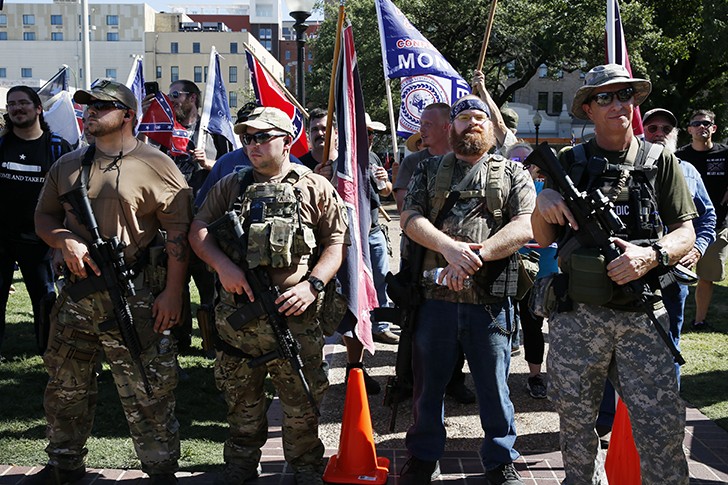 San Antonio's defenders of Confederate monuments aren't like the other guys.

At least that's what their leader, Robert Beverly wants you to believe. This Is Texas Freedom Force (TITFF), the group behind Saturday's protest to save the Travis Park Confederate monument, is only trying to "protect all things Texas."

"We would not stand up to support anything having to do with race," he told the Current Tuesday. "We are just here to correct the behavior of those who — I don't know — maybe they weren't spanked enough as a kid."

In fact, Beverly said he hates the way the police are treating black people in the U.S. — even though most are "too damn lazy."

"I've hired them all the time, but they're either on drugs or don't show up," he said. But, Beverly added, he's definitely not racist (that's just what the liberal media want you to believe).

"They're just lazy, don't want to work," he said. "I bet the blacks didn't even knew about this statue until they saw the news we were coming."

On Saturday, as temperatures crept toward 100 degrees in downtown San Antonio, Beverley's group exchanged slurs and insults with those supporting the statue's removal. San Antonio Police Department officers appeared to focus on monitoring the counter-protesters more than the group with semi-automatic weapons strapped across their camouflaged chests. Beverly said they were armed just in case they had to "neutralize a threat."

San Antonio's clash felt like the boiling point of a conversation about the looming Confederate monument that began several years ago — but was reignited in early July by the local Black Lives Matter movement, shortly after New Orleans toppled the last of its memorials to the Confederacy. Thanks to a shakeup in the mayor's office and City Council, civil rights advocates saw an opportunity to finally remove the 118-year-old monument to soldiers fighting for slavery.

"If the community wants change, but the city's not on board, we can't get much done," said Johnathan-David Jones, a leader within SATX4, the local BLM group behind Saturday's counter protest. "But we now have the most progressive city council in history. I can't see any reason that there will be any hesitation."

SATX4's July 4 rally to remove the monument inspired Councilmen Roberto Treviño and Cruz Shaw to file a proposal requesting the city take the statue down and place it in a less central space. That's when TITFF jumped in the game.

In cell phone videos from the Saturday protest, SAPD officers herd counter-protesters with their bikes, blocking any from interacting with the TITFF protesters. This pleased Beverly — he said the police intervention explains why the San Antonio protest didn't incite the kind of lethal violence seen in Charlottesville over the weekend. In both the Charlottesville and San Antonio clashes over Confederate memorials, he believes the "opposition" was to blame.

"Other side was just a bunch of banshees. Bunch of idiots, why would I try to have a logical conversation with them?" he asked. "It was not the place for dialogue."

Like most organizations defending Confederate monuments in the U.S., TITFF are of the belief that the Civil War had nothing to with race or slavery (it "became a political issue after the fact.") He said that Councilmen Treviño and Shaw must have had poor 7th grade history teachers for thinking the Civil War was rooted in slavery.

"Hate, violent rhetoric and racism have no home here," wrote Treviño in a press release before the weekend's protest. "I hope that some of those tough conversations are had in order to move our city forward."

Treviño and Shaw have yet to bring their proposal — which now has the signed support of three other council members — to the full city council. On Wednesday, 10 men armed with semi-automatic weapons and bulletproof vests escorted TITFF's second in command, Brandon Burkhart, to City Hall, where he testified against the proposal in front of city council. While the armed men waited outside, he blamed Shaw and Treviño for the drama that's unfolded around the statue's takedown.

“Do you guys see the problems that you’re causing?" he asked them. "Do you know the death threats that I’ve received?”

Burkhart's been the face of the group on social media, where he posts Facebook live updates almost daily. Prior to the Wednesday meeting, he condemned the racist faction of the Charlottesville protest. At the same time, he echoed President Trump by suggesting he needed more facts and wanted "both sides of the story" before forming an opinion about what really went on. Maybe James Fields, the man who rammed his car into a crowd of anti-racist protesters Saturday, killing 32-year-old Heather Heyer and injuring dozens more, was just scared, Burkhart said. The Department of Justice, meanwhile, has labeled this incident "domestic terrorism."

Beverly said he's delighted that President Trump has come into the White House and "turned the table over." Sure, he said, the guy isn't great at communicating, "but he knows there are problems that have to be resolved." It's certainly nothing like the Obama Administration.

"When you have blacks that don't follow the law and the president brings their families to the White House, what do you expect?" he said, pointing to Michael Brown, the unarmed teenager gunned down by police in Ferguson, MO in 2014. "Now Trump ... he's upsetting the system."

TITFF plans on returning to city hall's Wednesday public open mic sessions (called "citizens to be heard") until they see Shaw and Treviño's proposal thrown out. And if it moves forward? Beverly said he will guarantee both councilmen face a recall election.