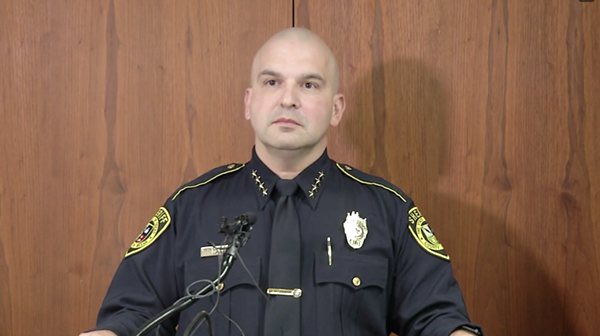 Less than ten days after seven Bexar County deputies were placed on administrative leave for an alleged “hazing ritual,” another former Bexar County deputy has been arrested and charged for assaulting an inmate on April 19.

Garrett Flores was arrested at 7:20 p.m. Tuesday night and charged with “official oppression,” a Class A misdemeanor punishable

by one year in jail and a fine of up to $4,000. Flores, a 30-year-old former Bexar County deputy, has been under investigation for the incident since April.

During a Wednesday press conference, Bexar County Sheriff Javier Salazar confirmed that Flores, who was hired as a probationary deputy in June 2016, was involved in an altercation with an inmate in April 2017. Initially, the investigation was focused on the inmate after Flores claimed the inmate had assaulted him, forcing Flores to use force in return.

But after reviewing the video of the incident, Flores' supervisor quickly determined the initial assault from the inmate never occurred. Salazar said the video “completely contradicted the deputy’s accounts of what had occurred."

According to Salazar, Flores had assaulted the inmate with “very little provocation, no physical contact, and no justification to use force on that inmate.” After the deputy’s version of events was determined to be false, the department’s Public Integrity and Internal Affairs units subsequently began an investigation of the deputy’s conduct within a week of the incident, according to Salazar.

Flores was removed from having direct contact with inmates when the investigation began, and was instead placed in an administrative role “behind the scenes,” according to Salazar. Flores was ultimately terminated on June 2, and charges against Flores were eventually filed with the District Attorney’s office, leading to his arrest on Tuesday night. He was released on bond Wednesday, with his bond amount set to $10,000.

The inmate has no lasting injuries and remains in custody, according to Salazar.