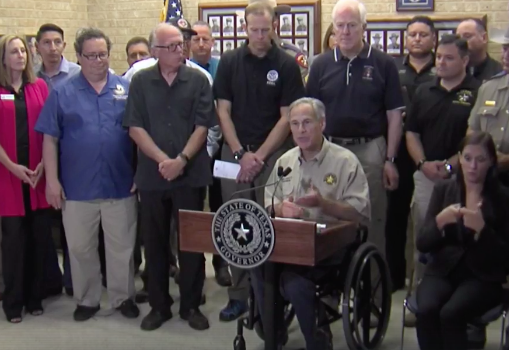 The feds have opened up emergency funding for thousands of Texans displaced by Hurricane Harvey — and those still battling the rising floods in Houston. In a Monday press conference in Corpus Christi, Gov. Greg Abbott said that 18 of the 54 counties included in his disaster declaration are eligible to apply for federal funds through Federal Emergency Management Agency.

Abbott explained that for a county under a state disaster declaration to become a federal requires, it has to meet a certain financial threshold. "Depending on what's learned in the next days, there may be more counties added to that list," he said.

There are currently more than 8,000 federal staffers in the state to help with disaster relief, and Abbott's activated the entire Texas National Guard (roughly 12,000) to help.

Long said one of the first goals is getting people who've lost their homes out of shelters and into hotels or longer-term housing.

"The state of Texas is about to undergo one of the largest recovery housing missions the country's ever seen," Brock said at the Monday press conference. "It's not going to be easy."

Some Texans are scrambling to file insurance claims for their lost property before Friday, when a next state law goes into effect that would make it harder to sue insurance companies. Legal experts say this won't affect many homeowners hit by Harvey's floods, since those who have flood insurance plans are usually covered with federal — not state — insurers. But it's a different story for those along the South Texas coastline whose houses have been nearly erased by the hurricane winds.

"I know this may seem like the last thing people have on their mind as they are stranded from their families, homes and businesses, but the new law strips people of their rights," Geoff Henley, a Dallas lawyer told the Dallas Morning News, "and so immediate action is necessary."